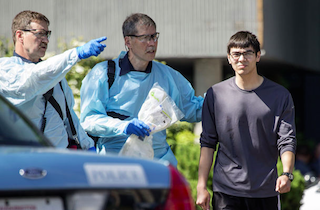 Unlike many of the country’s worst mass shooting events in recent years, including the one that happened last month near the UC Santa Barbara campus, this story has a genuine hero at its center. Instead of giving the perpetrator — who is still alive and in custody — the notoriety he so clearly craved, we have the opportunity to shine a light on someone who bravely stepped in to stop the violence.

Police who responded to the scene identified 22-year-old Jon Meis as the student who managed to use pepper spray to subdue the gunman while he was trying to reload his shotgun. The shooter managed to injure four people and kill one other, but he did not get the chance to wreak further havoc on the campus even though he was carrying more ammunition that would have allowed him to do so. That’s right, in this case a bad guy with a gun was stopped by a good guy with pepper spray.

According to The Seattle Times, Meis was on duty as a monitor, sitting at a desk in the lobby of SPU’s Otto Miller Hall on Thursday afternoon when the gunman entered and started shooting indiscriminately. Meis, who typically carries pepper spray on him wherever he goes, saw the shooter trying to reload his shotgun and quickly jumped in to incapacitate him.

Meis’ roommate summed up the heroic act on Twitter:

I'm proud of the selfless actions that my roommate, Jon Meis, showed today taking down the shooter. He is a hero. #prayforSPU #SPUshooting

What Meis was able to do flies directly in the face of multiple arguments the National Rifle Association, and particularly its executive vice president Wayne LaPierre, has been making since the 2012 Sandy Hook Elementary School shooting briefly rocked the nation and made some people believe that the country was actually ready to tackle the gun issue in a serious way.

LaPierre’s manta, which he hammered home just one week after the Newtown incident, was this: “The only thing that stops a bad guy with a gun is a good guy with a gun.” Now, of course there are situations in which that might be true, but as Meis demonstrated yesterday, it is possible to stop a gunman without the use of another deadly weapon.

If Meis and other students in the area had been armed, as gun rights advocates have argued they should be, the potential that more people could have been injured or killed by bullets flying back and forth only would have increased. Instead, this student was able to use a highly effective non-lethal weapon like pepper spray to bring down the gunman without causing increased risk to others.

When some brave members of Congress began to propose actual legislation that would put limits on the types of guns Americans could purchase with impunity, the NRA kept fighting back just as hard. One issue raised after Newtown was the possibility of banning large magazines for semi-automatic weapons that can fire off up to 30 bullets at a time without the shooter having to reload.

Last April, Fox News’ Megyn Kelly confronted LaPierre about this issue directly. “Those families directly affected say if Adam Lanza, the shooter at Newtown had not had 30-round magazines, if he’d only had ten rounds in the guns, more children would have lived,” Kelly said to LaPierre. “Your thoughts?”

At first, LaPierre dodged the question completely, saying the effort to limit magazine size was just part of a “decade-long agenda against firearms,” but Kelly pressed him on the issue. “People that know guns know you can change magazine clips in a second,” he eventually said. “There’s no evidence that, you know, that anything would have changed.”

According to information released by police, the Seattle shooter was not using a semi-automatic weapon; he was using some form of shotgun, a fact used by the pro-gun rights blog The Truth About Guns to bolster its own argument about gun access:

We recently reported that the suspect in today’s shooting at a Seattle college was stopped when school staff sprayed pepper spray in the guy’s eyes and tackled him to the ground as he was trying to reload. That chain of events would normally play perfectly into the gun control activist’s playbook — the idea that you don’t need a gun to defend yourself and we need magazine restrictions to force shooters to reload more often and give good guys a chance to tackle them — except for the fact that in this instance the firearm in question was a shotgun.

But there’s a glaring problem with this logic. It is precisely because the gunman was using a firearm that needed to be reloaded frequently that Meis had the opportunity to step in and stop him before he was able to kill more than one person. No, a federal assault weapons ban would not have stopped this particular shooting. But if gun activists got their way and large magazine weapons were completely unrestricted, then these types of incidents will only become more deadly.

The prevalence of random shootings with multiple victims in this country can lead to a devastating apathy that threatens to prevent any common sense solutions, as Jon Stewart demonstrated this week. But in figures like Jon Meis, who did something truly heroic to prevent more senseless death, there are glimmers of hope.

And if nothing else, his act helped prove the NRA wrong: it doesn’t always take one gunman to stop another.