How Often Has Hillary Been Depicted as Crazy, Scary, or Masculine on Magazine Covers?

How Often Has Hillary Been Depicted as Crazy, Scary, or Masculine on Magazine Covers? 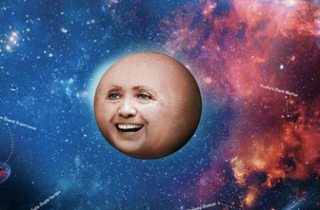 Hillary Clinton has spent the last 25 years under intense media scrutiny, with almost no aspect of her personal life, her politics, her appearance, her sex, or her age not placed under the microscope at one point or another. As one of the most powerful, interesting, and at times confounding women in the public eye, she’s graced her fair share of magazine covers in that time – although “graced” may not be the best way to put it.

POLITICO has put together a gallery of 75 magazine covers on which Clinton has appeared over the years, from a People cover in 1992, up through that horrendous New York Times magazine cover from earlier this year, and many others.

I thought it would be interesting to see what, if any, patterns have persisted over the years in the ways we cover and write about her in the media.

With Bill and Chelsea: 3

With an explicit reference to “family”: 5

With her face morphed into Obama’s: 2

In bed with Obama: 1

In which she is sexualized: 3

In which she appears more glamorous than usual: 7

In which she’s depicted as Nixon: 1

In which she is presented as scary, or overly serious looking: 8

In which she is depicted as either goofy, or crazy: 16

In which she is depicted as a historical monarch type: 3

Explicit references to power or ambition: 23

In which she is calculatedly masculinized: 5

Which refer to a scandal: 17

Which specifically reference her shot at the presidency: 17

Which mention her age: 1

Which depict her as a giant, floating space testicle: 1