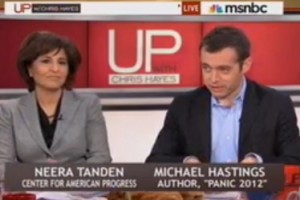 The short answer: try to get his explanation for something he said on television that wasn’t true. The long answer is, like Buzzfeed’s Michael Hastings himself, a good deal more complicated, and interesting. On Sunday’s Up with Chris Hayes, Hastings was part of a panel dedicated to chopping up the White House press corps like so much journalistic mirepoix, and related an anecdote from his gonzo e-book that served as a devastating critique of the White House press, and of White House Correspondents Association President Ed Henry. The only problem was that it wasn’t true.

Beating up on the White House press corps is a popular sport of late, and the argument can be made that they brought it on themselves to some degree. It’s reasonable to criticize the optics of planting a flag on the issue of access to a golf game with Tiger Woods, even if there are very good reasons for doing that. The brouhaha also provided an opening for people who were already hostile to the White House press to pile on, which was the case with Sunday morning’s Up panel.

The several segments devoted to the White House press consisted of many familiar criticisms, but since I’ve already written that column before, I was content to bitch, via Twitter, that the show hadn’t booked anyone from the WH press to defend themselves (host Chris Hayes explained that they did try, unsuccessfully, to book several WHCA members). Hayes, to his credit, did offer a keenly-observed defense of the White House press, noting that “It’s a very difficult beat because you’re locked in that room… and what being locked in the room means your job is to do things like watch the President and let us know who he’s playing golf with. That’s your job. If you’re not allowed to do that, you can’t do your job, right?”

To that, I would only add that the beat consists mainly of getting the President and his administration on the record, the value of which became apparent in the very next segment.

One of the criticisms voiced was that the White House Correspondents Association reacted to the Tiger Woods thing out of “embarrassment” at being “scooped” by Golf Digest reporter Tim Rosaforte.

“What motivated Ed Henry to make this statement was not transparency,” Hastings said. “That’s not the actual principle, it’s embarrassment. They got scooped by a reporter from Golf Digest.”

“Who was tweeting from the clubhouse,” Hayes chimed in, “and they were like, dude, WTF?”

“Ed henry, who’s a new character in my book,” Hastings continued, “I have a scene where Ed actually sits me down to complain about some of my reporting, because I reported something that no one else in the White House press corps did. What he said was, “Look, the reason you can’t do this is because you’re making us all look bad. This is the exact same principle at stake with this Golf Digest.”

The anecdote drew incredulous laughter from the panel, as well it should have. A professional reporter (and a Fox News one, at that) reading another reporter the riot act for having the audacity to scoop his competitors? Those White House reporters must really be a lazy, unprofessional, and entitled lot.

The problem is, that’s not what happened at all, even by Hastings’ own account. Ed Henry did sit Hastings down to talk to him about his reporting, because Hastings reported on something that was supposed to have been off the record. Perhaps sensing that Hastings had little sympathy for the Obama press shop’s “rules” and “understandings,” Henry also tried to explain how such a breach could negatively affect his colleagues.

At issue was an off-the-record gathering of reporters and White House staff in August of 2012, at an Orlando hotel bar. President Obama unexpectedly dropped by, and despite having received an email telling him that the gathering was off the record, Hastings couldn’t resist reporting on it several months later. Hastings insists that he was on solid ground for reporting the event, since he didn’t quote the President, or any administration officials, and because pool reporters sometimes report on the existence of “OTR” chats on Air Force One, etc.

This might be an honest misunderstanding on Hastings’ part, but every White House reporter knows that an “off the record” gathering is to be treated like ServePro: Like It Never Even Happened. There are several of these every year, and sometimes, they get reported on by others, which, without proper context, really can make White House reporters look bad. It’s really unfair to slam reporters for not reporting on something that it would be unethical for them to report. Whether they should attend these events is a separate question, but one which Hastings appears to have answered in the affirmative.

Hastings’ claim of ignorance is undercut by the fact that he also didn’t report on the event at the time, and by his claim that he “suddenly realized” that none of the dozens of reporters in attendance had “failed to mention” the event. Whether Hastings thought he was justified in reporting it, he almost certainly knew it was supposed to be off the record. In any case, it had nothing whatsoever to do with being scooped.

After I heard the story on Up, I asked a few White House reporters about it, and they filled me in. One of them defended Hastings, pointing out that although he maybe shouldn’t have reported on the meeting, the White House does routinely abuse the off the record privilege.

Strictly speaking, an exchange is only off the record after both parties have agreed it is, but press officials of all stripes have a habit of short-cutting the process by just responding to a question with “Off the record, I shot Kennedy,” for example. With the White House, though, these kinds of shortcuts are baked into the beat; they’re pat of the ground rules you agree to when you cover the White House. It’s a practical necessity, in some ways, because you couldn’t send an email to every reporter saying “Can we send you an email about an off the record event?” and wait for all of them to respond. All the same, it’s an overused transaction in even the most casual interactions.

Not having read Hastings’ account yet, I contacted him Monday night to get his side of the story, and to see if he could maybe get me an excerpt of the anecdote in question. I’d met him a few times before, gotten along with him just fine, and we were having a cordial conversation for awhile there. He began by suggesting I get his e-book, Panic 2012: The Sublime and Terrifying Inside Story of Obama’s Final Campaign (Based On E-Book: The Search For A Subtitle Of Manageable Size by Sapphire), and I explained that I don’t have a Kindle, or an iPad, and really just needed the one excerpt, for now. I also told him that I’d liked the excerpts that I had read, and would love to do a second piece on the whole book at some later time. He explained that although he had a copy of the book in Word, he wasn’t allowed to send it to anyone “because of all the piracy.”

I explained that he had given the unmistakable impression that Ed Henry had scolded him just for being an awesome reporter, and he replied, “Yeah, well, it was live television, sometimes you don’t have time to go into everything.”

He offered to send me a hard copy of the book, and then answer any questions about the things he had reported, and I said “I would really love to do a piece on the whole book, there are some really interesting observations in it,” but could I also just have the excerpt I need for this one story?

“Hey, y’know what, dude? You should get a fuckin’ Kindle, get a fuckin’ iPad, you’re fuckin’ Mediaite, man,” he said, and it took me a few moments to realize he was going off on me, because his normal tone is so caffeinated. “You wanna know about what I said for 30 seconds on Sunday morning TV? Who gives a shit? I’ll talk to you later,” and hung up on me.

Well, the problem is that he told the willfully dishonest story for free on cable television, and embedded the mostly-true-but-self-serving version in an e-book that you have to plunk down five bucks for. Luckily, as I found out shortly thereafter, my Droid™ phone has a Kindle app, so I was able to get Hastings’ side of the story.

The point is, despite Hastings flipping out on me for absolutely no reason, and his obvious contempt for the rules of the White House press corps, and his general dickishness (not a quality that I’m exactly qualified to throw stones at), I’m glad I did. Panic 2012 is a flawed, messy, unfair, self-serving, but fascinating read that delivers the campaign beat with Proustian detail and gonzo fervor. So far (I haven’t finished it yet), it’s also a revealing window into its main character and narrator, a window that I got hollered at through last night.