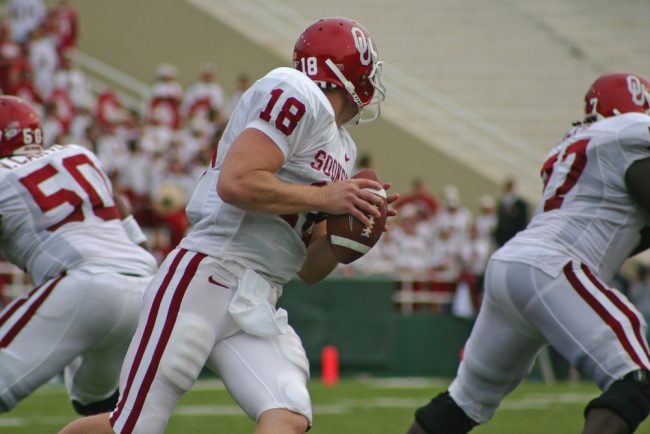 With a strong possibility of two SEC teams and perhaps even independent Notre Dame qualifying, it’s entirely possible that the other four power conferences will be fighting for just one spot in the college football playoff. The Big 12, undoubtedly, will be looking to the winner of Saturday night’s showdown in Norman to grab that spot for the conference. It’s No. 5 Oklahoma vs. No. 6 TCU, live in primetime.

The Sooners have bounced back from their not-as-bad-as-it-first-looked loss against Iowa State — scoring two big wins over rivals in the past four weeks. First, Oklahoma slid past Texas 29-24 in the Red River game. And then last week, in an absolutely wild edition of Bedlem, the Sooners beat Oklahoma State 62-52. Heisman contending quarterback Baker Mayfield has been back on his game for OU, helping lead an offense which has averaged 51 points per game over the past three weeks.

Of course, the Sooners are unlikely to produce kind of scoring output against a stout Horned Frogs defense. Over the past four weeks, TCU has yielded an average of less than seven points per game. They too suffered their lone defeat this season at the hands of Iowa State in Ames. And they too have gotten past it and have become a major threat to win the conference and make the college football playoff. No doubt, the winner here is in the driver’s seat.

Kickoff is at 8:00 p.m. ET. The game will air on FOX. Gus Johnson and Joel Klatt, the network’s lead college football announce crew, have the call. The action can be streamed free with a cable subscription on pc, cell phone, or tablet via Fox Sports Go — which can be downloaded via the iTunes store, and the Google Play store.