Huckabee Pledges to Go ‘All In’ to Help Trump to Victory

Huckabee Pledges to Go ‘All In’ to Help Trump to Victory 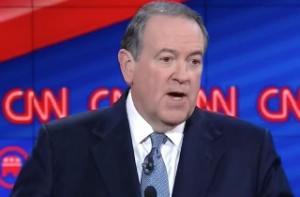 The morning following Ted Cruz‘s suspension of his campaign, former GOP candidate Mike Huckabee released a statement announcing his full-throated support for the party’s likely nominee and pledging to go “all in” to support Donald Trump.

Huckabee blasts the “hapless ‘Never Trump’ nonsense” and dismisses the media’s “giddy speculation” that there will be a contested convention. Trump, he writes, “broke the code, owned the media, and inspired the masses.”

In a statement entitled “The Voters Have Spoken,” the former Arkansas governor writes that the race is “all over.”

The combination of Donald Trump’s blowout of the Indiana vote and Ted Cruz’s decision to end his campaign put the lid on the nomination. Donald Trump will be the 2016 nominee, and I predict he will defeat Hillary Clinton and be the 45th President of the United States.

Every prediction about this year’s race was wrong. Those of us who brought years of experience and effective governing to the race found that voters were not interested. They blamed everyone from Washington for the mess and even blamed those of us who had never worked in DC

This is the first time Huckabee has thrown his support behind Trump so unambiguously, although his daughter has worked for Trump’s campaign as a senior adviser since late February. He had previously expressed his outrage that Republicans were planning to not vote for Trump, should he become the nominee, and has spoken with admiration of Trump’s “peaceful revolution.”

In the days leading up to the Iowa caucuses, shortly before he dropped out, Huckabee campaigned heavily against Cruz, accusing him of not being strong on social conservative values. But in his statement Wednesday, he diminishes Trump’s weak record on social conservative issues, averring that the party “will realize that whatever squabbles we have among people in the GOP, it’s nothing compared to the chasm between us and the socialist, big government approach of the Democrats.”

Ted Cruz was half right in his campaign speeches when he said that “conservatives are coalescing.” In the end, they coalesced, all right, but around Donald Trump.