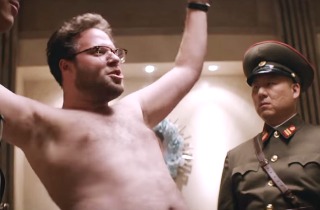 Let’s just all take a moment to process the fact that a major movie studio was hacked, lots of sensitive information was released, the hackers threatened 9/11-style attacks on movie theaters, movie chains are taking this very seriously, oh, and on top of all that North Korea might be involved and this could turn into an international crisis… all because of a movie starring Seth Rogen and James Franco.

The trailer features Rob Lowe taking off his hair and a joke about Nicki Minaj‘s ass, for God’s sake. This is the movie that’s causing so much trouble?

Well, yes it is, and despite Sony’s nervousness and Rogen and Franco pulling their press appearances, one human rights group is fighting back by planning to airdrop DVDs of The Interview into North Korea.

The foundation’s actions are those of a civil rights group, a free society,” HRF’s president Thor Halvorssen said. “Everything we do in a free society is a threat to a totalitarian government.

“The North Korean tragedy is human made and I don’t have an answer. But I do know that it starts with educating and creating a civil society inside that country and breaking the monopoly of information that the Kim regime has successfully been able to deploy for so long.”

Halvorssen said that it was the power of ideas that made The Interview such a threat to the North Korean government, not the film itself. “Parody and satire is powerful. Ideas are what are going to win in North Korea. Ideas will bring down that regime.”

And how are they gonna pull this off? Balloons. Yes, balloons.

Again, I feel the need to emphasize this is all happening because of the stars of Pineapple Express. I mean, damn.