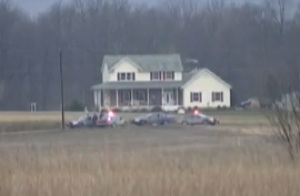 Since the passing of health care reform, political tensions have risen to a point of potentially scary proportion. Threats of violence against members of congress have been exemplified by both the right and the left as symptomatic of political vitriol and inflammatory rhetoric. WNYC’s Brian Lehrer recently commented that he hadn’t seen this level of rhetoric since the days leading up to the Oklahoma City bombing. Its within this context that recent news of seven members of what the media is calling “Christian Militia” have been arrested for allegedly plotting to kill Muslims.

It is likely inevitable that some will point to this story as yet another result of inflamed rhetoric, and it may very well be. In this instance, however, it appears that the threats of violence were intended not for political figures, but those of the Muslim faith.

Update: According to BreakingNews Twitter feed, prosecutors are charging that members of the Christian Hutaree militia planned to kill local Michigan police officer, then set off bombs at his funeral.

It appears that the group in question has their own website at Hutaree.com that includes the following text:

As christians we all are a part of the Souls of the Body of Christ, the one true church of Christ. Not any specific man made building or any man controlled organization. This is the belief of the Hutaree soldier, as should the belief of all followers in Christ be.

We believe that one day, as prophecy says, there will be an Anti-Christ. All christians must know this and prepare, just as Christ commanded. Luke 22:35-37, And He said to them, “When I sent you without money bag, knapsack, and sandals, did you lack anything?” So they said, “Nothing.” 36, Then he said to them, “But now, he who has a money bag, let him take it, and likewise a knapsack; and he who has no sword, let him sell his garment and buy one. 37, “For I say to you that this which is written must be accomplished in me: ‘And He was numbered with transgressors,’ For the things concerning Me have an end.” This clearly states the reason for the training and preparation of the Hutaree.