We’re Now A Nation Of Insidery, Political Junkies Thanks To Politico
video

We’re Now A Nation Of Insidery, Political Junkies Thanks To Politico 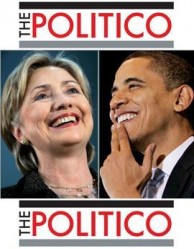 I think it’s hard to argue that starting about the middle of 2008 politics became the dominant force in the national news cycle. Don’t believe me? How many of you knew what a super delegate was prior to March of ’08? I think it’s also hard to argue that the organization driving most of the political stories is Politico. They have made turning a minor aside into a major story — with a national ripple effect — to the point that it sometimes feels like they are the ones holding the White House’s press strings.

Considering the site has such powerful clout it was interesting to hear the founding editors John Harris and Jim VandeHei tell Howie Kurtz on this weekend’s Reliable Sources that they are basically dope suppliers to an audience of political junkies who thrive on the minutiae.

VANDEHEI: We’re basically — to our junkie audience. We do think a lot about our audience as sort of — like, they are political compulsives, they’re political junkies. They thrive on this stuff.

Who exactly is this junkie audience in the eyes of Politico?

Politico is not edited for the casual observer of politics who maybe once a week wants to check in from wherever they live in Minneapolis or San Francisco, and say I wonder what’s happening in the political world? Those people are welcome, and they might enjoy it, but we fundamentally edit this publication for the people who are clicking three, four, five, half a dozen times a day, who aren’t casual observers of this but are intensive observers. And in most cases, also participants in this process.

The problem — if you are someone that sees this as a problem…as White House often does — is that the junkies who feed on these tidbits happen to be people who determine the news cycle and who themselves are looking for traffic inducing, catchy, quick, posts that will bring eyes to a site or broadcast. Hence a national news cycle packed with a lot of insidery intrigue that may carry a great deal more weight than it warrants. Or not. Maybe this is exactly what a nation of politcal junkies wants. Video of the segment below.