If It’s San Bruno That’s Burning And Not The Koran, Will The Cable Nets Notice?

If It’s San Bruno That’s Burning And Not The Koran, Will The Cable Nets Notice? 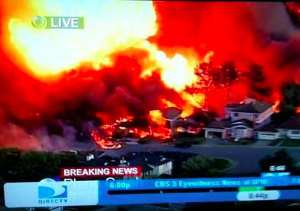 The breaking news email alert came in from CNN: “State of emergency declared in San Bruno, California, after massive gas explosion and fire.” Thing is, it came in at 2:54 a.m.

Here’s when I first heard about it: From our contributor Philip Bump, who tweeted at 10:08 p.m. EST: “Not news on the East coast, apparently: a massive explosion in San Bruno, California, that has taken out almost two dozen homes.”

In between, there was a lot of activity on Twitter. And a lot of updates on SFist.com. And local news seeming to do a bang-up job (the Twittersphere has much love for @ABC7BayArea). But there was not — for hours — anything on the three cable news networks.

By 10 p.m. it was Anderson Cooper on CNN, Greta Van Susteren on Fox News, and rerun time with Olbermann on MSNBC. I wasn’t watching at that point, but that’s the schedule. What I was watching: Twitter. It was from Twitter that I learned that the explosion was from a natural gas pipeline, that the pipeline ran along the San Andreas Fault, that at least 20 homes were burning, that initial flames had shot 50 – 60 feet into the air. It was from Twitter that I also learned that the cablers were totally absent.

By this time I was back in my apartment, remote in hand. I went first to CNN, then MSNBC, then Fox. The verdict: 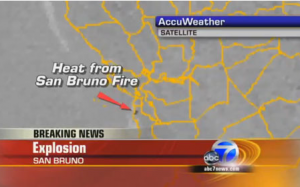 Can we stop for a moment and just say: WTF? (If Keith Olbermann can incorporate the term officially into his broadcast, then it certainly applies here.) Two hours after a natural gas pipeline exploded setting a whole neighborhood on fire — in California, which should scare everyone who remembers coverage of the huge brush fires from the last two Septembers — and news destinations are driving people to Twitter for their news? News which was readily available in a quickly-unfolding story, which had echoes of the Deepwater Horizon (explosion and subsequent fire from steadily leaking natural resource gone awry), potential for intrigue (the FBI was on the scene), and TV-ready disaster images of giant, leaping flames? I like Anderson Cooper’s dimples as much as anyone, but come on.

One thing I noticed about the Twitter coverage: There was a lot of picking on CNN. As in, “Better than watching the crawl on CNN — Google real-time search on San Bruno fire” (@MathewIngram) and “Maybe if we tell CNN there were Qurans in the impacted houses, they’ll cover San Bruno.” (@pbump). Fairly or not, this is because CNN is held to a higher standard. It calls itself “The Most Trusted Name In News.” In Guy Adams’ piece last month for the Independent, I told him, “CNN is still a destination news channel for live coverage of unfolding events…If something happens, check CNN.” That’s not a bad burden to be saddled with, as a news channel — but then you gotta live up to it. 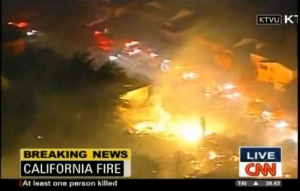 By 1 a.m., CNN was on it, with Dan Simon on the ground and unreal shots from the scene. Simon reported that concrete debris had been flung 50 feet with the force of the explosion, that a firefighter on scene had said it was the worst he’d ever seen, as the accompanying images showed a glowing fireball inside a residential neighborhood at night. (VIDEO below.) I checked MSNBC and Fox &mash Olbermann rerun, Greta rerun. When I flipped back to CNN they’d already switched back to their own rerun of Anderson Cooper. They were apparently back and forth all night (I was informed by someone within CNN), and the video below attests to that. But by then, anyone who wanted updates was finding them online.

There was this interesting tweet from @Roy1956: “nice to know our 24 hour news networks are on top of things.” He said “our” 24 hour news networks” the way you’d say “our” postal service, police force, sanitation workers, government. He treated the 24 hour news networks like a public service, and a public trust. Well — like it or not on both sides, they sort of are. They’re businesses, driven by ratings, but when emergency news breaks, we need to know that we can go to them (and on the even of the anniversary of September 11th, we’re reminded that this is especially crucial). Last night, for way too long, per @dankois, the only network covering it was the Weather Channel.

It is a study in contrast with Brian Stelter’s piece in today’s NYT about how the coverage of some nutty pastor in Florida’s plans to burn the Koran on Sept. 11th was built up through escalating coverage into a national story. While the San Bruno fires were raging, guess what the reruns of prime-time cable news show were covering?