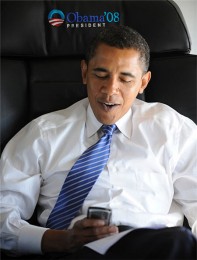 President Obama had an outburst last night! Sort of. Alas, it was less Kanye-style than actually about Kanye West — the President was quoted on Twitter referring to him as a “jackass” — but it’s still a headline dominator this morning. Also, it was supposed to be off the record. However, thanks to the beauty of Twitter we all get to enjoy the unedited Obama. Here’s what happened.

Sometime around 8pm last night (side note: when will Twitter get proper time stamps?) ABC’s Terry Moran, who belongs to the million-high club, twittered out this: @TerryMoran: Pres. Obama just called Kanye West a “jackass” for his outburst at VMAs when Taylor Swift won. Now THAT’S presidential.

Snap! Shortly, thereafter Politico’s Patrick Gavin RT’d it, and shortly after that Gavin noted that the tweet had been deleted. Politico quickly did some digging and was told by ABC

That In the process of reporting on remarks by President Obama that were made during a CNBC interview, ABC News employees prematurely tweeted a portion of those remarks that turned out to be from an off-the-record portion of the interview. This was done before our editorial process had been completed. That was wrong. We apologize to the White House and CNBC and are taking steps to ensure that it will not happen again.

It seems Moran was watching the feed of CNBC’s interview with the President and it was maybe unclear to him which portion of it was off the record. The Atlantic’s Marc Ambinder notes: “If Terry didn’t know it was OTR, then he’s not bound by the term. The issue here (I think) is whether it was ok to tweet off the CNBC feed.” That said, the President should probably know better than to use that sort of language in front of a group of journos in this day and age of free-flowing information if he’s really worried about it reaching the public.

The bigger issue may be how the super-fast, unfiltered response time that Twitter allows for does not favor the “editorial process.” And whether slip ups like this (enjoyable for the public though they may be!) will cause either news organizations and/or the White House to place restrictions on Twittering. Or whether the public-at-large will merely get used to the unfiltered public figure. Steve Krakauer and I had Terry Moran on our mediabistro.com podcast last winter. At the time Moran had made headlines for tweeting whilst aboard Air Force One, and I asked him (approx 3min mark) if he thought there would be any security concerns which would arise from such unfiltered access: “the keep the President really safe, and they keep the Press away from anything that could compromise that safety.” Not counting his own mouth it would seem!

That was back in February, Twittering times have changed enormously since then. So much so, news organizations will likely have to put in place some sort of Twitter policy asap if they haven’t already done so (ESPN is already there). One can only hope the powers that be will err on the side of transparency, and that one slipped jackass will not make a jackass out of everyone.