‘I’m Gonna Lock Your Ass Up’: Video Surfaces of Darren Wilson Arresting Man for Filming Him 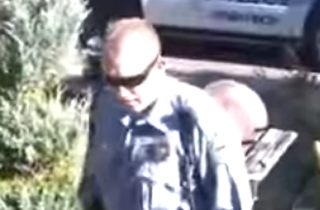 As a grand jury in Ferguson, Mo., decides whether or not to indict Officer Darren Wilson for the death of Michael Brown, a new video from 2013 reveals that Wilson had once threatened and arrested a man for videotaping him with a cellphone.

Mike Arman posted the video to YouTube last week depicting Wilson coming onto his property, standing on the edge of his garden path, and saying:“If you wanna take a picture of me one more time, I’m gonna lock your ass up.”

“Sir, I’m not taking a picture, I’m recording this incident sir,” Arman responded. “Do I not have the right to record?”

“No, you don’t; come on,” Wilson said, and promptly arrested him.

According to the Guardian, Arman’s account lines up with the Ferguson police incident report filed in 2013. Arman, who has a criminal record, was charged with failing to comply with Wilson’s orders, but claims that the charges were dropped once his lawyer learned he had footage of his arrest.

A Ferguson PD spokesman told the Guardian that the officer in the video is not Wilson, but the incident report says that Wilson went to Arman’s house that day to issue a court summons regarding derelict vehicles on his property.

In the incident report, Wilson also said he told Arman “to remove the camera from [his] face,” and said that he resisted arrest: “I was forced to grab his wrists one at a time and secure them into handcuffs.” (FYI, it’s perfectly legal to record a police officer while they’re on duty.)

Watch footage of the incident below: