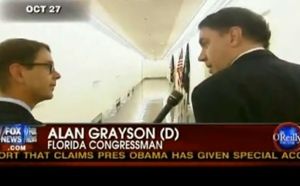 Yesterday, Mediaite offered a sneak peek at Fox News’ Griff Jenkins ambushing controversial Democratic Rep. Alan Grayson (D-Fl) outside his office. The first thing I thought when I saw this was that Grayson’s repeated demands that Jenkins make an appointment constituted some particularly weak sauce. On last night’s O’Reilly Factor, Bill O’Reilly and Jenkins called Grayson out for hiding behind his press flack, and I couldn’t agree more.

Alan Grayson became an instant hero to many on the left when he refused to apologize for his “Die quickly” rant on the House floor, mainly because he was the first Democrat ever to refuse any demand for an apology. Since then, he’s done everything he can to earn the name of his new website, CongressmanWithGuts.com, ratcheting up the tough talk along the way. This week, however, he was forced to apologize for a month-old remark that resurfaced. He called a female assistant to Fed Chairman Ben Bernanke a “K Street whore.”

Grayson didn’t help his “Congressman with guts” cred any when he basically took on the role of his own receptionist in response to Griff’s questions. Here’s the full O’Reilly segment:

First of all, I don’t know what “rules” Grayson is talking about, unless the First Amendment has some kind of “appointments” clause in it. Griff approached him in the halls of the Capitol, an area that we all pay for. It’s a far cry from, say, tracking someone down while they’re on vacation. If Grayson didn’t want to talk to Griff, he should have had the guts to say so.

As for making an appointment, I can certainly vouch for that strategy going nowhere if your subject doesn’t want to talk to you.

In fact, the whole episode put me in mind of an experience I had at the Democratic National Convention in Denver last year. Much like Griff, I wanted to confront a public figure about statements he had made, but was met with a similarly gutless response:

The fact of the matter is, if you’re doing your job well as a journalist, some people are not going to want to talk to you. If this were not the case, the press would simply be one big PR operation. As Major Garrett pointed out in his radio interview on Tuesday, access is often the price you pay for skepticism.

Having said all of that, Grayson should have been able to handle Jenkins better than this. Perhaps he just blanked, a notion supported by this video footage that we obtained, which shows what Grayson was thinking as Jenkins questioned him: