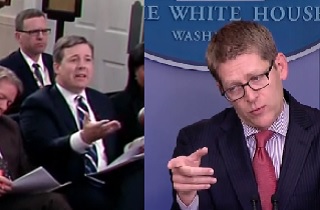 If things keep going this way, they’ll have to start calling it the White House Beefing Room. At Thursday’s daily briefing, a combative Fox News Chief White House Correspondent Ed Henry met an equally combative White House Press Secretary Jay Carney in rhetorical combat over the economy, and the ongoing Republican effort to leverage the debt ceiling.
Things escalated quickly to Carney challenging Henry to an eventual Crossfire debate. This is the second time he has made such a reference to Henry this month, but the first one was a good deal more friendly.

Henry began by asking Carney about the Fed’s decision to continue its efforts to stimulate the economy, and what that says about the economy. “Is that not an indictment of the President’s policies, since he’s had five years now?” Henry asked.

Despite the loaded construction, Carney started off with the calm boilerplate about just how bad things were when the President took office, how things have improved, but not enough, and how critical investments in infrastructure, research and development, and education are needed, investments that Republicans want to cut.

Then, things took a turn when Henry said “2011, the President signs a Budget Control Act of 2011 — the last time we had this big debt ceiling fight — into law. And he says, ‘We have $2 trillion in deficit reduction,’ the President says, ‘yet it also allows us to keep making key investments in things like education and research that lead to new jobs, and assures we’re not cutting too abruptly while the economy is still fragile.’ August 2011. Here we are more than two years later, you’re saying the same thing about we need to invest in education…”

“And how many jobs has the economy created since then?” Carney shot back.

Henry replied “And Bernanke yesterday said it’s not keeping up, that people are leaving the workforce. That’s why the unemployment…”

“You and I, we’re going to do this on Crossfire one day, I promise,” Carney said, adding “And let’s be clear that I’ll be on one side and you’ll be on the other.”

Carney began making the point that those investments are as crucial today as they were then.

“The budget of 2011 did that, according to the President,” Henry said. “Two years later…”

Carney, clearly perturbed, said “We need to help you with your facts about what happened in 2011.”

He took Henry through the evolution of the so-called “sequester,” which was a part of the Budget Control Act that was never supposed to take place because both sides were supposed to recognize how onerous it would be, and reach an agreement on deficit reduction.

“Now, the sequester is indiscriminate, across-the-board cuts, which Republicans bemoaned, until, lacking an alternative, they celebrated, including significant cuts to our military readiness and cuts to Head Start and other programs that are vital to millions of American families across the country,” Carney continued. “So again, if you’re suggesting by this that we ought to be cutting education, you should say so. If you’re suggesting we ought to be — that’s what the Republican budget proposes — that we ought to be cutting — we ought not to be funding infrastructure.”

“The President said we were making those investments,” Henry responded. “Two years later, the Fed says it’s just not growing.”

“Those are facts,” Henry persisted. “That’s what he said. He said it’s just not growing quick enough for us to take the training wheels off.”

Carney then explained that the “key investments” that have led to growth ought not to be cut, and that “Republicans have put forward ideas that would bring us back to policies that caused the worst job loss of our lifetimes.”

Henry then drew laughs from a few reporters when he cracked “Since you said you wanted to focus on facts, yesterday you and the President talked about how ‘never in the history of America has the debt ceiling been used to extort a President.’ You probably saw The Washington Post looked at that, looked at the facts and gave you four Pinocchios. So are you going to correct that today?”

Carney and Henry went back and forth over Glenn Kessler’s “Fact Check” for awhile, with Carney standing by his interpretation of the President’s use of the term “extort.”

“There is no question that prior to 2011, there has never been a case where one party with one ideological agenda has threatened to default on the United States obligations for the first time in its history,” Carney said. For what it’s worth, Kessler, in an update to his fact check, appeared to concede Carney’s point, but maintained that it differed from the President’s.

“So why did The Washington Post give you four Pinocchios?” Henry asked.

After a few more rounds, an exasperated Carney cracked “Does anybody else want to watch Ed and me debate?”

“Yes, I said it is absolutely correct that prior to 2011, no party to the budget agreements of the past had ever threatened default if it did not get its way ideologically,” Carney said. “It did not happen. And in 2011, we saw it happen. And even the flirtation with default, the fact that there were members of Congress on Capitol Hill who said, we should default rather than reach an agreement with President Obama, a compromise with President Obama — that took an enormous toll on our economy.”

It has been clear, for a long time, that Ed Henry has a keen understanding of his audience, and it appears that Carney is gaining one for his.