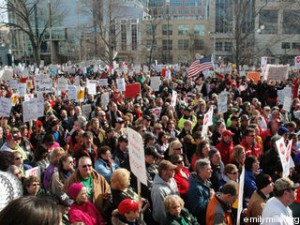 A deputy prosector in Johnson County, Indiana, has resigned his job after it was revealed that in February, during the large protests in Wisconsin over Gov. Scott Walker‘s anti-public employee union bill, he e-mailed Walker’s office and recommended that they conduct a “false flag operation” — to fake an assault or assassination attempt on Walker in order to discredit the unions and protesters.

As Wisconsin Watch, a project of the Wisconsin Center for Investigative Journalism reports, Carlos Lam initially denied that he had sent the e-mail, which was part of the tens of thousands of e-mails released in an open-records settlement the Walker administration reached with the local paper the Isthmus and the Associated Press.

When contacted by Wisconsin Watch, Lam had initially denied sending the e-mail, claiming that he had been the victim of identity theft, and said he did not support the criminal activities described in the e-mail: , “I think he’s trying to do what he has to do to get his budget balanced. But jeez, that’s taking it a little bit to the extreme.”

However, Lam admitted late in the afternoon that he did send the e-mail, and resigned his job.

After praise for Walker, the email — sent Feb. 19, during union demonstrations against Walker’s budget repair bill — then took a darker turn. It suggested that the situation in Wisconsin presented “a good opportunity for what’s called a ‘false flag’ operation.”

“If you could employ an associate who pretends to be sympathetic to the unions’ cause to physically attack you (or even use a firearm against you), you could discredit the unions,” the email said.

“Currently, the media is painting the union protest as a democratic uprising and failing to mention the role of the DNC and umbrella union organizations in the protest. Employing a false flag operation would assist in undercutting any support that the media may be creating in favor of the unions. God bless, Carlos F. Lam.”

Cullen Werwie, Walker’s press secretary, said no one at the office had seen the email or contacted Lam. Werwie condemned the email’s suggestions Monday in a statement to the Center.

“Certainly we do not support the actions suggested in (the) email. Governor Walker has said time and again that the protesters have every right to have their voice heard, and for the most part the protests have been peaceful. We are hopeful that the tradition will continue,” Werwie wrote.

This does call to mind Walker’s infamous phone call in late February with blogger Ian Murphy, who posed as Republican financier David Koch. During that call, “Koch” asked Walker whether he had thought about “planting some troublemakers” among the protesters. Walker said “we thought about that,” but didn’t do it.

When asked about this at a press conference, Walker had said, “In my case we ruled it out,” and also added: “When he talked about inciting things and ‘crushing the bastards,’ we get ideas from people all across the state. And we want to have a civil discussion about this and a debate about this, and the fact that we discussed this, and we said it wasn’t a good idea.”

(Note: As the full transcript of the “Koch” call shows, Walker said that he was worried such a tactic could backfire and increase the pressure for compromise: “My only fear would be is if there was a ruckus caused is that that would scare the public into thinking maybe the governor has gotta settle to avoid all these problems.”)

Previously in Indiana, Deputy Attorney General Jeff Cox lost his job after tweeting that the protesters should be dealt with using “live ammunition,” following that up with “against thugs physically threatening legally-elected state legislators & governor? You’re damn right I advocate deadly force.”

At the time, the Attorney General’s office said in a statement: “We respect individuals’ First Amendment right to express their personal views on private online forums, but as public servants we are held by the public to a higher standard, and we should strive for civility.”

Note – this article was written by Eric Kleefeld for Talking Points Memo and appears here via a content sharing deal.