Inside A Trump’s Supporter Mind! Why Khan, Putin Or Most ‘Trump Gaffes’ Are Irrelevant
Opinion

Inside A Trump’s Supporter Mind! Why Khan, Putin Or Most ‘Trump Gaffes’ Are Irrelevant 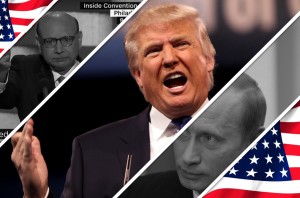 Get ready for a rare glimpse inside the mind of a Trump supporter!  As everyone in the media loves to predict each and every week that finally Donald Trump has crossed the line and said something so unforgivable that his supporters will abandon him, it is endlessly amusing to watch these same pundits continue to be dumbfounded when support for Trump increases after each and every controversy.

These media-hyped, supposedly lethal gaffes are irrelevant to Trump supporters primarily because of two reasons: (i) a strong distaste for media hypocrisy and bias, and (ii) a respect for a rare willingness to bravely fight back against critics without fear of consequence or concern for political correctness.  However, be warned Trump fans, there were in fact two (and only two) instances in the past year that this Trump supporter could not ignore, and I fear if Trump is not careful then the potentially game-changing mistake that many in the media have been praying for, could indeed happen.

The most recent statements from Trump that resulted in journalists clutching their pearls were Trump’s reaction to Khizr Khan’s criticism of him at the Democratic National Convention and Trump’s sarcastic implication that Vladimir Putin should hack and search for Hillary Clinton’s missing “deleted” emails.  Despite cries that Trump’s comments prove he has a disqualifying “black soul” or that he might be committing treason, let me assure you that the only people listening to such unjustified hysteria are already part of the choir to which Trump critics endlessly preach.

Arguing that these are even gaffes falls on deaf ears amongst Trump supporters primarily because the media hypocrisy is breathtaking.  Similar to the wrath that Khan unleashed on Trump at the DNC convention, Benghazi mom Patricia Smith unloaded her anger towards Clinton at the Republican National Convention.  What was Clinton’s response towards Smith? Essentially Clinton called Smith a liar.  Now tell me, how is what Trump said in response to Khan in any way more insensitive or offensive? I’ll answer for you, it simply isn’t.

Regarding the comments about Putin, why is the mere suggestion that if Russia or anyone has Clinton’s suspiciously missing emails that they should release them, more worthy of widespread media outcry than the very act of Clinton setting up a private server to have the ability to delete public work-related emails at her own, unchecked, discretion?  Furthermore, even if Trump is “playing footsie” with Putin, as so many of his critics moan, why is this behavior traitorous, but when President Obama engages with Iran or Cuba on various agreements, such friendly talk with these foreign leaders is hailed as a shining example of great diplomacy?

In the past year, Trump has made many allegedly controversial statements or supposed gaffes, but in almost every case, they were made as a “counter-punch” to someone either attacking Trump directly, attacking Trump supporters, or generally speaking, attacking America.  When Trump refuses to back down from the insults often hurled in his direction, he presents an image of a strong, courageous, unafraid leader that his supporters are happy to rally behind.  Yet there were two times when his behavior deviated from that image, when I found it impossible to defend his actions, and when unsurprisingly his poll numbers justifiably dipped.

Trump’s decision to skip the Fox News debate before the Iowa caucus during the Republican primaries because of perceived unfair treatment by Megyn Kelly and Trump’s out of left field attack on the judge in the Trump University case because of perceived unfair treatment were two examples in the past year when his controversial actions did matter to Trump supporters.  However, not because he was too offensive, but instead, to paraphrase Bill Maher’s favorite phrase about Trump, because he was a whiner, rather than a winner. Kelly and Judge Curiel were merely doing their respective jobs, and rather than taking them on in the appropriate forums (debate stage or courtroom) and winning there, Trump’s behavior did not reflect that of a fearless leader.

Why this is relevant now is because with rumblings that Trump is upset with the scheduling of the forthcoming presidential debates, let this be a warning to both the pundits and Trump himself.  The only potential gaffe Trump could make that would dampen his support would be shattering the image he has expertly crafted for himself as being a confident commander.  Trump supporters will never get angry with Trump over what he says.  Yet if he seems hesitant  to say anything to Hillary on a debate stage as often as possible, then that will be a very different and a very sad story.