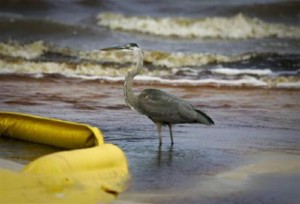 It’s day 86 of the BP Oil Disaster — but there’s a good chance you already knew that because the news media have been closely following the situation from way back in April. Well, Andrew Tyndall is sick of it. On the Tyndall Report, he wrote an entry arguing that the national coverage of the situation has gone overboard; enough already!

When this whole ordeal began, Tyndall said “the commitment of the network news divisions to this disaster was commendable.” Each of the major networks sent teams down to the Gulf and tried to cover it as best they could. The climax of the coverage, according to Tyndall, “came when a political angle was added to this initial Gulf Coast focus” and “the debate mounted as to whether the federal government would be able to hold the multinational corporation accountable.”

But that drama has played out, he writes — and the coverage has become disproportionate:

Consider this comparison: the first nine weeks of the BP oil disaster attracted a cumulative 871 minutes of coverage; the first nine weeks of the Hurricane Katrina disaster attracted only marginally more, 903 minutes…Poisoning coastal marshes and killing marine ecosystems and depriving fishing villages of their livelihoods and despoiling tourist resorts are all horrible. But it is an insult to the hundreds of dead and the thousands of displaced of the city of New Orleans to cover those two disasters as if they were of equal magnitude.

Tyndall then goes on to discuss how nightly newscasts are covering the local effects of the disaster. He argues that at some point, local stories become just that — local:

Why should the unemployment of a Louisiana oysterpacker be any more newsworthy, from a national perspective, than a laid-off California teacher or a long-term unemployed Michigan autoworker? Why should the empty beachfront bars of Pensacola attract more national attention than the casino recession on the Las Vegas Strip?

The BP disaster is a major news story, he admits. The issue is that the networks “have confused those angles that are of pressing national concern with the regional consequences that properly belong to the news crews of their local affiliates.”

The national questions are about the federal regulation of the oil industry, the future of offshore drilling and holding BP accountable. That is what Tyndall says should the national news should focus on. The local woes are for the local media.

Yet interestingly enough, a new Gallup poll shows that Americans are turning their attention away from the Gulf disaster:

Asked to name the most important problem facing the country, just seven percent of respondents in the July Gallup poll said “natural disaster response/relief” — a major drop off from the 18 percent who said the same in June.

While, according to the Washington Post, the phenomenon is not new, there are signs that news coverage plays a role in this sentiment:

Coverage of wars often follows a similar arc; the public pays very close attention at the inception of the conflict but interest fades as the story plays out day in and day out via newspapers, websites and, most importantly, television.

There’s no concrete evidence the two are linked, though one supposes there’s certainly a possibility that what Tyndall calls disproportionate news coverage of the BP Oil Disaster is contributing to an increasingly sense of apathy toward the issue. In this day and age of media overload it’s perhaps not surprising that news overkill would desensitize citizens — but when such a trend exists (with the numbers to prove it), the media should, as always, be aware of it and do their best to present the most important news and focus on the right aspects of a story.