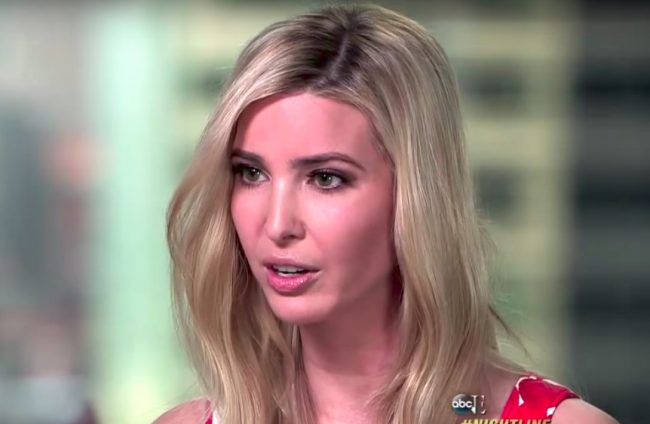 Over the last several days, a number of flattering pieces have been published in various outlets about Ivanka Trump. The stories have come as her father, President Donald Trump, announced the U.S. will withdraw from the Paris climate accord — a move which Ivanka vigorously opposed, according to numerous outlets.

This is not the first time that these types of (often anonymously sourced) articles have portrayed the first daughter in a positive light.

Journalists, politicos, and others have begun to notice.

I’m going to get so sick of this story genre. https://t.co/4UkKLJ3Ueu

You’re not there yet?

Way too many reporters have swallowed the Jared/Ivanka/Dina/Gary are heroes spin way too many times – why does it keep happening?

Imagine if we protected the climate the way the press looks after Ivanka Trump’s ego.

This “Ivanka trying to stop her dad” spin is more ludicrous by the day. Does anyone buy it? Why are media outlets dutifully reporting it? https://t.co/dmX3H1SHaU

Ivanka and Jared’s desire to use the press to send signals to their NY friends is really pitiful. You work in the White House, act like it https://t.co/bkSMpWcWjR

Since Ivanka and Jared obviously have a talented comms team, why doesn’t the president hire whoever does their press?

“Now write about how hard I tried to change Daddy’s mind on the climate whatever”
“Yes Ivanka, anything else you need in the Post?”

I never, ever want hear from anonymous sources again about Ivanka Trump’s “moderating” role in this Administration. Useless prop.

Why are Ivanka allies pitching this fluff coverage? It’s disgusting. Name one substantive accomplishment she has contributed to since Jan?

So why all the Ivanka love from the press? One theory has begun to gain steam.

From the way this first sentence is constructed, I’d put money on Ivanka being a source for Politico. https://t.co/Om9nrRdPD9

Seems obvious that Jared & Ivanka are key WH sources and that some reporters compete to flatter them by portraying them in a friendly light. https://t.co/uN0Jax9VIH

How kind of Ivanka to leak this self-serving story to the press. https://t.co/4bFNUb3pTW pic.twitter.com/qZFQNw30wB

And who do we think is the source for this story? *cough* Ivanka *cough* https://t.co/pVSjUfTtJl

In a piece for The New Republic, Brian Beutler voiced his agreement with those who point to Ivanka as a White House leaker, and blasted those who continue to write flattering pieces about her.

“[E]very political reporter will at some point find that such “well-placed” anonymous sources aren’t necessarily sources worth listening to. They lie, or they bullshit, or they think they know more than they do, or they self-deal one news clip at a time. Or some combination thereof. That’s Ivanka.”