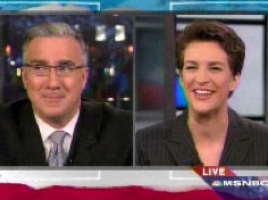 Last week Rachel Maddow visited the Conservative Political Action Conference (CPAC) and came away with a rather shocking revelation: conservatives hold Maddow in the highest esteem. In today’s age of bitter partisan media, it’s a pretty stunning development that a liberal icon such as Maddow, can be so well received “behind enemy lines.” To be fully appreciated, one need only imagine the reception that fellow MSNBC cohort Keith Olbermann would have received in the same venue. Perhaps its time to officially recognize the fact that Rachel Maddow is now officially more respected and influential than Olbermann. And she’s just getting started.

For the first bit of evidence in this argument, we turn to Mediaite’s own oracle of influence – the Power Grid. While not purely scientific, it is an effective measure of the ebb and flow of online buzz. True, it does not make the distinction between positive and negative attention, but it has, over time, proven to be a reliably accurate measure of such quantitative metrics like mentions on blogs, search engines and news results. And what does it tell us about Maddow and Olbermann? Great question.

The Power Grid currently ranks Rachel Maddow at #31; Keith Olbermann at #45 (ranked second and third respectively behind Chris Matthews among all of MSNBC’s hosts and anchors. The biggest quantitative difference in their overall metrics — it appears that more people are consistently mentioning Maddow in blogs, searching for her on Google or Bing and mentioning her in news results than Olbermann. And in TV ratings, Maddow’s recent visit to CPAC gave her higher ratings than her lead-in…Olbermann.

But it goes beyond numbers. Rachel Maddow is now considered a thought leader among her political allies – she is frequently cited as a well-reasoned (as well as well-researched) source for both constructive and stinging critiques of her political foes. But she goes about making her case in a way that is neither obnoxious, annoying nor self-aggrandizing. But more importantly, she never relies on ad hominem attacks on her opponents – something that can’t be said of Olbermann.

The truth is that comparing Rachel Maddow and Keith Olbermann isn’t really fair to either. For one, they aren’t really rivals – they genuinely appear to be friends and to enjoy each others company. But Olbermann is a provocateur; a polemicist, an entertainer. While his commentary and analysis is often smart and insightful, it is more often “inciteful” – meant to poke fingers in the eyes of his Fox News compadres (who happen to get much better ratings, it’s worth noting).

Maddow is a thinker, and one dare says, a party leader. Politicians are far more likely to mention Maddow as a source than they are with Olbermann, precisely because her comments come without the baggage that Olbermann’s.

Finally, when NBC’s Sunday morning institution Meet the Press needs an analyst, who do they turn to? Imagining Keith Olbermann joining the round table for MTP , compared to the stunning turn by Maddow, is all the evidence one need make to highlight their differences.