Is Sen. Rubio’s Staff Misleading The Public On The Immigration Bill’s Contents? (UPDATED)

Is Sen. Rubio’s Staff Misleading The Public On The Immigration Bill’s Contents? (UPDATED)

The misinformation from Senator Marco Rubio‘s office regarding the Gang of 8’s immigration reform bill — regarding what the bill does and does not do — continues.

On Wednesday, Rich Lowry, editor of the National Review, sent Alex Conant, Rubio’s press secretary, a question via Twitter asking whether it was true that even those individuals who have been deported may qualify for legalization. Conant replied that it “only” applies if the deported individual has a child legally in the U.S. 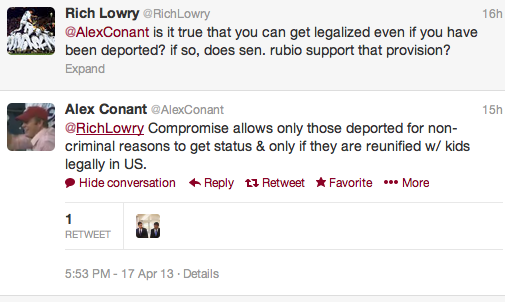 My follow-up inquiry to Conant (pictured below) was not responded to: 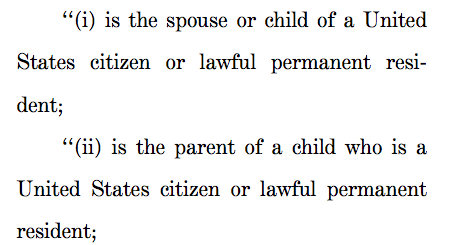 So why is Conant claiming it is “only” if the deported individual has a child here, and why is Conant refusing to address a correction request?

Meanwhile, Senator Rubio’s inaccurate and misleading press release yesterday (citing non-existent ‘triggers’ required for the process) remains on the senator’s website, as I wrote about yesterday here. The ‘six triggers’ myth seems to have originated with a Daily Caller piece by Matt Lewis. Rubio’s office apparently ran with that idea, making Lewis’s erroneous interpretation of the bill the center-point of their press release.

Now is a good time to clarify what exactly are the triggers. Here’s a quick guide:

First, it is inaccurate to discuss triggers in general. There are two, distinct stages: (1) the triggers for the first legalization (converting an undocumented immigrant into legal status, called the Registered Provisional Immigrant Status) and (2) the triggers needed for those individuals to later go from R.P.I. status to green card holders/permanent residents.

The first stage has no ‘triggers’ that must be met for the initial legalization because the only ‘trigger’ is that the strategies on border fencing and border security have simply ‘commenced.’

Nor does the second stage have any real triggers that must be met for the permanent residency (green card) process to kick off. It only requires (a) that the border plans be substantially deployed and substantially operational; (b) that E-Verify has merely been ‘implemented’; and (c) that an electronic exit system is being used at airports and sea ports.

So we only have 3 items that could even remotely be considered ‘triggers’ – and they only apply to green-lighting the permanent residency process ten years down the road (not to green-lighting initial legalization process).

(a) Though Rubio yesterday mistakenly claimed in a video that the bill requires those border plans to be ‘fully’ implemented, as I noted here, the bill only requires ‘substantial’ implementation of those plans.

(b) E-Verify. As Daily Caller‘s Mickey Kaus noted in an article this morning, it is unlikely E-Verify (or the lack thereof) will play a role, as the requirement is easy to go around:

“It only took Conn Carroll a few hours to figure out one way: by tying it up in litigation. A mere 13 pages into the bill, Carroll found provision (c) (2) (b) of Section 3, which reads [emphasis added]:

(B) EXCEPTION.—The Secretary shall permit registered provisional immigrants to apply for an adjustment to lawful permanent resident status if —
(i)(I) litigation or a force majeure has prevented one or more of the conditions described in clauses (i) through (iv) of subparagraph (A) from being implemented; or
(II) the implementation of subparagraph (A) has been held unconstitutional by the Supreme Court of the United States or the Supreme Court has granted certiorari to the litigation on the constitutionality of implementation of subparagraph (A); and
(ii) 10 years have elapsed since the date of the enactment of this Act.

In other words, if the ACLU can just tie up the E-Verify system at the DHS and in court for 9.5 years after legalization (which happens six months after the date of enactment) all the legalized illegals get green cards anyway, whether the system is in place or not. The same goes for the exit-visa system.

The ACLU yesterday denounced E-Verify as “job-killing, costly and privacy-invasive employment verification” and pledged to “fight every step of the way”–so we’re off to a good start!”

“But whatever parts of E-Verify are still standing after 10 years will almost by definition be good enough–since the law only seems to require that the DHS Secretary have ‘implemented a mandatory employment verification system to be used by all employers’–not that it actually be in use by all employers, or have been “implemented” in a way that covers, say, 50% of new hires, or 40%, or 25%. It just needs to be … ‘implemented’ somewhere, in a form that’s intended to be scalable to cover ‘all’ employers.”

(c) As for the electronic exit visa system, one is already in place (and does not seem to have worked, clearly). Moreover, notice that the bill’s language does not read at “all” air and sea ports.

When will Senator Rubio’s staff either familiarize itself with the bill’s contents or stop disseminating inaccurate information to the American public?

UPDATE (April 18, 12:46 p.m. EST): Senator Rubio’s press secretary, Alex Conant, replied to our inquiry Thursday afternoon, requesting a comment on this Column. Conant now notes that the legalization of deported individuals is not limited to those with children legally in the U.S. (as his Tweet yesterday claimed). 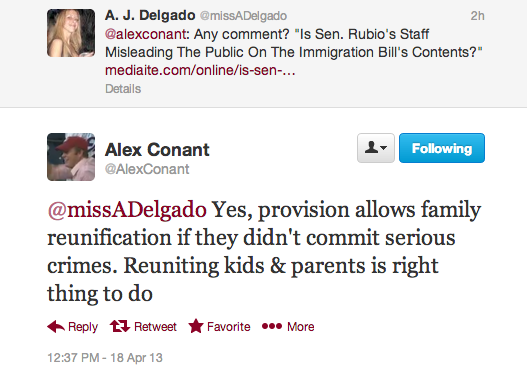 While emphasizing the reunification of parents and children, Conant failed to add that the bill also allows deported individuals with spouses legally in the U.S. to apply for legalization — and is thus not limited to those with children or parents legally in the U.S. 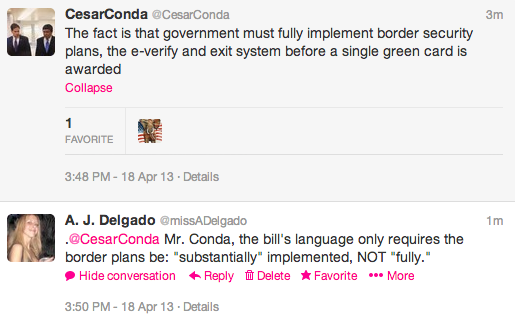 Senator Rubio made the same claim yesterday, in his YouTube video, as I noted in my column yesterday (see “Update” section, here). The false information persists, however.

This is what the relevant portion of the bill reads, regarding so-called ‘triggers’ for the green card/permanent residency process to proceed. Notice it reads “substantially” — not “fully,” as claimed by Rubio and his staff. 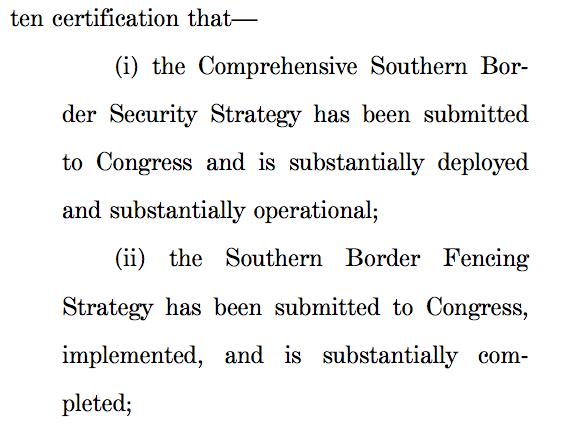 UPDATE III: (April 22, 7:23 p.m. EST) While Senator Rubio’s Press Secretary, Alex Conant, pushes the idea that the immigration bill is proceeding ‘despite President Obama, not because of him,’ in order to sell it to conservatives:

… then there’s this headline from The Examiner:

As Byron York, Chief Political Correspondent, writes in the article:

Organizing for Action, the activist group that grew out of President Obama’s 2012 campaign, plans what it calls a “major day of action” next month to gather support for the bipartisan Gang of Eight comprehensive immigration reform bill.

“This is a huge moment for President Obama,” said Emmy Ruiz, OFA’s immigration campaign manager, in an email sent to supporters of the Obama campaign Sunday. “The president made it clear last year that comprehensive immigration reform is a big part of his agenda — and we can help him keep that promise to the American people.”

So much for Conant’s claim. President Obama seems to be very much onboard.

UPDATE IV: (April 25, 9:21 a.m. EST) While Senator Rubio and his staff constantly used the standard talking ‘they will have to pay back taxes‘ (see e.g., here,) it turns out ‘the back taxes’ requirement does not apply to most. As The Daily Caller‘s Mickey Kaus notes, citing a Politico piece:

Negotiators had to choose between a hard-line approach favored by Republicans, like Sen. John McCain (R-Ariz.), that would have required immigrants and employers to painstakingly piece together a tax history so the government could collect what is owed and a less burdensome option of focusing on people who already have a past-due bill with the Internal Revenue Service.

Guess which approach they chose!

It seems back taxes will only be collected if the IRS had already moved to collect them, and no back taxes are otherwise required for undeclared past income (common for illegal immigrants who often work in cash-only, ‘under-the-table’ jobs).

Rather than issue a public correction (“We’ve said applicants would have to pay back-taxes but, upon detailed review, it appears only some would. We apologize for the erroneous information”). the Rubio camp has simply quietly switched to the ‘have to pay taxes’ instead of ‘have to pay back taxes.’

UPDATE V (posted April 25, 9:52 a.m.): The American Spectator‘s Betsy McCaughey posted a detailed article, entitled “Read the fine print, Senator,” in which the former Lieutenant Governor of New York dismantles the ‘none will receive welfare or federal benefits myth.’ She starts off by noting that, by speeding up the process for legalizing those who are applying through the proper channels, as the bill does, it will naturally also increase the number of individuals who collect from a variety of programs (note that many programs, including food stamps, do not require citizenship but rather merely legal residency). Most importantly, McCaughey then blasts apart the oft-repeated claim by the Gang of 8 that the illegal immigrants legalized under this plan will present no burden to taxpayers, writing:

Despite this, Senator McCain announced on April 9 that the bill’s authors “do not intend to have the proposals that we are enacting be additional costs to the taxpayers of America.” That’s outrageously untrue.

So is Senator Rubio’s claim that illegal immigrants granted provisional status will “have to be able to support themselves, so they’ll never become a public charge.” The Senate bill does say that, citing the never-enforced section 212(a)(4). But the bill also waives that requirement for anyone who is unemployed, in job training, getting a high school or GED diploma, taking care of a child, younger than 21 or older than 60, or attending college (pp. 99-102). That covers everyone. To stay in this country as a provisional and qualify for a green card in ten years, you need to be working except if you’re not (Sec. 245C(b).