Is Ted Cruz Less Radical Than We Think?
Opinion
you don't know ted

Is Ted Cruz Less Radical Than We Think? 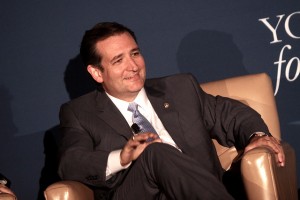 For one thing, she writes that Cruz “is not a fire-breathing extremist” or a “wild-eyed maniac,” both misconceptions that have, to some degree, worked to his advantage — since he’s able to cast himself as an maverick crusader within his own party, endowed with an ideological purity missing from the party establishment. The fact is Cruz is much more considered with his provocations than the image of an extremist suggests, and he displays a suave, subtle calculation engaging with rivals, the media, and party figures that does little justice to his image as a no-holds-barred renegade.

“He’s hardly unhinged, quite the opposite,” Grieder writes. “If anything, his preternatural self-possession is the most unsettling thing about him.”

A recent AP study found Cruz to be the most ignorant of all the presidential candidates on climate change, based on comments made in public. In this respect, he may play the fool better than any of his rivals, but Grieder believes Cruz is “smarter than all of us.” She notes his skill as a strategist, his meticulousness, and his deftness at debate.

Perhaps most significantly, Grieder argues that, far from being an insurgent, “Cruz is a mainstream conservative from the Texas Republican establishment.” She elaborates:

Like most of the Republicans who have held high office in Texas lately, Cruz is fiscally conservative, and focused on fiscal issues; socially conservative, but only once or twice a season; pragmatic rather than ideological; and, as noted earlier, not nearly as radical as his reputation would suggest.