Is The Media Hampering Recovery In Haiti?

Is The Media Hampering Recovery In Haiti? 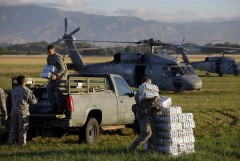 Is the media part of the problem where Haiti coverage is concerned? Noam Scheiber at The New Republic thinks they may be. Keeping in mind Port-au-Prince has exactly one runway (a Doctors Without Borders plane was turned away earlier today) Scheiber worries that the deluge of journalists is not only resulting in redundant stories, but is hampering the arrival of aid, and straining the ultra frail infrastructure.

And, of course, the bottlenecks getting into the country are only the beginning. The stresses the journalists place on the country’s threadbare infrastructure once they arrive are just as troubling. In a country where much of the shelter has been destroyed, leaving tens of thousands of people wandering the streets, housing journalists poses a real opportunity cost. Worse, the journalists must eat, drink, and circulate once they’re in Haiti. As a practical matter, it means they often end up mooching off supplies intended for earthquake victims (one MSNBC correspondent was overjoyed to receive a 10-gallon donation of fuel from the U.S. Army). Or they drive up the price of goods available for disaster-stricken Haitians. This Boston Globe piece reports that the cost of flashlights, batteries, crackers, soda, and water has soared since the earthquake. Even if they aren’t the main culprit, it’s hard to believe journalists, with their U.S.-based expense accounts, aren’t contributing to the problem by outbidding locals, whether directly or indirectly.

So yes, there is a loose argument to be made that the early influx of media may (may) have hampered some incoming aid (though, honestly if the numbers are as Scheiber suggests 200 media folks probably is not the root of the airports problem) . And there is probably a larger point to be made about flooding the zone with redundant stories (Scheiber smartly suggests creating a disaster pool of reporters).

However! To suggest that journalists are “outbidding” locals for resources strikes as ludicrous. Reporters are outfitted by the networks with necessities such as water, food, flashlights, batteries, etc (hence part of the high costs of covering such stories). If nothing else, what frequently puts reporters in danger (as noted by Steve Harrigan during his emotional spot the other day) is that they are in possession of these necessary items making them targets, not that they are attempting to procure them from the locals. I highly doubt Anderson Cooper is in the streets of Haiti snatching black market batteries from suffering locals, if anything my money would be on him handing them out.