Is the White House Calling Senator Jon Kyl a Liar? Pretty Much 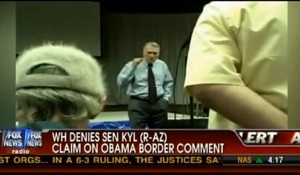 Over the weekend, Redstate broke the news that Senator Jon Kyl (R-AZ) had accused President Obama of using border security as leverage to pass comprehensive immigration reform. The White House denied the exchange, followed by a double-down by Kyl’s spokesman. At today’s briefing, Chip Reid and I asked Press Secretary Bill Burton about the conversation. While Burton wouldn’t specifically call Kyl a liar, his response, coupled with Kyl’s reaffirmation, doesn’t leave much wiggle room.

Now, when it comes to securing the border, we’ve put more resources at the border than have ever been there before.  The President has doubled the number of border agents who are there. We’ve put other surveillance systems in.  We’ve continued to work to make sure that we’re taking care of the security of the folks who live down in the border states, and we’re going to continue to do that.

But, no, that statement is not true.  And we’re just going to continue to work and hopefully get the support of senators like Senator Kyl for comprehensive reform because that’s the only way we’re really going to be able to address this problem.

Q    Did Kyl lie?  Or is this within the range of acceptable political exaggeration?

Q    Well, the White House would have to make that.  You’ve said it’s not true.  Is that just a lie?

MR. BURTON:  I don’t know if anybody specifically called his office, but as you know we are in constant contact with the leadership on the Hill and I’m sure this will come up in conversations.

Q    So you assume somebody will reach out if they haven’t do so already?

MR. BURTON:  I assume that we’ll be in contact with his office.

Tommy Christopher: You said that you know that the President didn’t say what Senator Kyl says he said, but do you have the White House’s version of what he did say, how that conversation went, or can you get that?

MR. BURTON:  No.  I mean, what the President — the President’s feelings on immigration are crystal clear.  I went over them earlier in the briefing.

MR. BURTON:  Well, there’s not a transcript of the meeting.

Q    Is there a taping system in the Oval Office?  (Laughter.)

Q    There’s not a — there’s not anybody taking notes at that meeting?

Tommy Christopher:  Will there be one now?

MR. BURTON:  If it’s just one-on-one, unless one of the people in the room is taking notes.

Q    This happened at a leadership meeting.

MR. BURTON:  What Senator Kyl said was one-on-one.  Now, at the leadership meetings, there are more people in there and some people take notes, but even in that, there is no stenographer.

Q    But in these one-on-ones, there’s nobody else in the room?

Q    Right.  Now, the original denial came from Dan.  Did Dan talk to the President specifically about that?

MR. BURTON:  Rahm discussed it with the President.

Q    So it went from the President to Rahm to Dan?

It doesn’t appear that Burton had heard Kyl’s pushback, which makes it less likely that Kyl simply misspoke. According to Burton, the President says it’s not true, and Kyl says it is. Maybe it’s time for the President to start having a stenographer around when meeting one-on-one with Republican leaders.