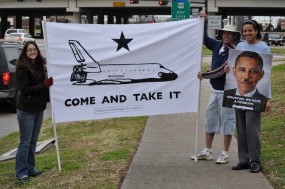 In a profile published online yesterday, Time calls Kesha Rogers, the winner of the Democratic Senatorial primary in Texas, the Longhorn State’s own Alvin Greene. Unfortunately this does not mean that there’s another potential politician running around making interviews that resemble performance art. What Time instead means by the comparison is that there’s another Democratic candidate out there who is being isolated by the Democratic Party. While Greene is being shunned for being too secretive, Rogers has made her intentions abundantly clear. Those intentions just happen to include impeaching one Barack Obama.

The comparison ends there. Rogers very much did not come out of no where (she’s been running for office in the state in 2006) and she readily explains her personal politics and background:

“Rogers, 33, told TIME she is a “full time political activist” in the Lyndon LaRouche Youth Movement, a recruiting arm of the LaRouche political organization that is active on many college campuses. The LYM espouses LaRouche opposition to free trade and “globalism” (the UN, the World Bank, the International Monetary Fund) and it also calls for a return to a humanist classical education, emphasizing the works of Plato and Leibnitz. On her professional looking campaign website, kesharogers.com, she touts the LaRouche political philosophy — a mix of support for the economic policies of President Franklin D. Roosevelt and the impeachment of President Obama — and calls Obama a “London and Wall Street backed puppet” whose policies will destroy the Democratic Party. During the campaign, she was photographed carrying an oversized portrait of the President with a Hitler-style moustache penciled on his lip.”

Still though, she’s getting a very similar treatment as Greene, treatment that can only be described as “hostile”:

“Meanwhile, the state party has adopted a resolution denying any party support for Rogers, citing the alleged racist and discriminatory views of the LaRouche movement — allegations that Rogers, who is African-American, firmly rejects. District 22 has also been stricken from the party’s official online list of congressional races.”

She’s even been getting the same “first name on the ballot” theory that Greene got when people tried to explain his victory. However, that theory doesn’t seem to make nearly as much sense here since Rogers had a highly-visible campaign that involved “staking out a corner on a major intersection in the district to appear almost daily with a large sign: ‘Save NASA. Impeach Obama.'” (She also has been photographed holding one of those “Obama with a Hitler moustache” signs that are so ubiquitous at Tea Party rallies)

Comparing Rogers to Greene seems a little unfair. To the Democratic Party, Alvin Greene is basically a joke. Kesha Rogers may end up being little more than an annoyance to the Party, but she’s not a joke.