J.K. Rowling Goes on Anti-Trump Tweetstorm in Response to a Misleading Video

J.K. Rowling Goes on Anti-Trump Tweetstorm in Response to a Misleading Video 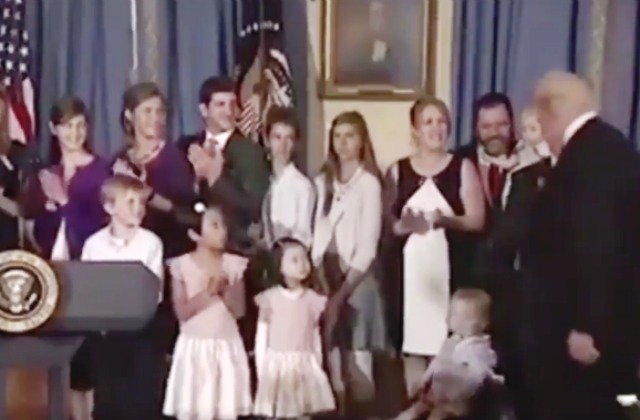 On Friday, author J.K. Rowling helped spread a video of President Trump that, while appearing to show him ignoring a child, was incredibly misleading.

The video, which was posted by a House Democrat’s aide on Twitter, went viral since it looked like Trump was ignoring the boy in the wheelchair. But that was not the case:

Deleted an earlier tweet because it turned out to be missing some context. Apologies.

The Harry Potter author was one of the people who picked up on the video as it went viral and went on a tweetstorm about it:

'When someone shows you who they are, believe them.' – Maya Angelou https://t.co/Op6HUrRo80

Trump imitated a disabled reporter. Now he pretends not to see a child in a wheelchair, as though frightened he might catch his condition.

This monster of narcissism values only himself and his pale reflections. The disabled, minorities, transgender people, the poor, women

(unless related to him by ties of blood, and therefore his creations) are treated with contempt, because they do not resemble Trump.

My mother used a wheelchair. I witnessed people uncomfortable around her disability, but if they had a shred of decency they got over it. 1/

So, yes, that clip of Trump looking deliberately over a disabled child's head, ignoring his outstretched hand, has touched me on the raw. /2

How stunning, and how horrible, that Trump cannot bring himself to shake the hand of a small boy who only wanted to touch the President. /4x

Rowling posted those tweets on Friday, and she’s been getting criticized on Twitter for not taking them down now that it’s been made pretty clear the video was deceptively edited:

JK Rowling, in 8 tweets, raged that Trump snubbed a disabled boy.
This is Trump greeting that boy.
Why won't she delete & apologise? pic.twitter.com/c61cqRoBzE

J.K. Rowling’s tweet of a deceptively edited clip of Trump and a boy in a wheelchair has 58K+ RTs, and counting https://t.co/cn4mxj6w7h

Why hasn't @JK_Rowling corrected her bogus tweets about this? (https://t.co/9kdDSDkEQo) https://t.co/UjF0Pw8n7G

73k retweets for a video cut to make it look like @realDonaldTrump ignored a kid whose hand he shook the minute he entered the room. https://t.co/bG5kpEKJtN

Harry Potter and the Thing That Didn't Happen https://t.co/zFX87zofFs

This string of tweets based on a selective clip are still stacking retweets even though Trump talked to the disabled child at the start https://t.co/C5KWOGWANk

Look, my brother is disabled. I get it. But you are purposely ignoring that this is not at all what happened. https://t.co/Ft5rlyX4Dc

Chelsea Clinton retweeted one of Rowling’s tweets but took it down:

Hello Piers-I hadn't seen the full video until now. I removed the retweet. And, the President should have shaken the boy's hand at the end.

@brianstelter hi Brian, by the time you retweeted @TwitchyTeam, I had already undone the retweet. Hope you're having a wonderful Sunday!