Jay Carney Admits ‘The President Is Campaigning…For Growth And Jobs’ 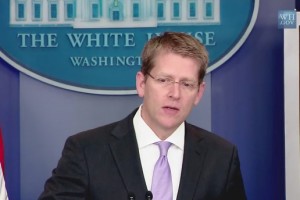 During Monday’s White House briefing, CBS News Chief White House Correspondent Norah O’Donnell asked Press Secretary Jay Carney about criticism that President Obama‘s American Jobs Act tour is nothing but a political campaign. Carney responded with a bit of comic timing that got laughs from the press corps, saying “You’re absolutely right, it is a campaign.  The President is campaigning,” then taking a long pause before adding, “for growth and jobs.”

The laughter was only partially due to Carney’s deadpan chops, and probably mostly due to skepticism about his response:(via The White House)

Norah O’Donnell:    Can I follow on Helene’s question? By Wednesday, the President will have done five jobs speeches in just seven days. If you believe that Congress was so persuaded when they were back at home, why does the President need such hard-driving tactics in order to sell his plan?

MR. CARNEY: Well, Norah, you know as well as I do that in the world we live in 2011, that we do not — this President, any President, does not command the nation’s attention in the sheer numbers that a President used to because of the way our media works. And the reality is, as go the American people so goes the members of Congress, in this case. So we have to keep focusing everyone’s attention on this because it’s vitally important. You don’t just simply say —

Norah O’Donnell: — campaign in order to do this?

MR. CARNEY: I’ve been asked this question, isn’t this a campaign. You’re absolutely right, it is a campaign. The President is campaigning for growth and jobs. He is out there —

MR. CARNEY: He is out there campaigning for growth and jobs.

Norah O’Donnell: Not for his reelection?

Norah O’Donnell:  And will he take that message then to non-swing states? There are a number of Republicans in the South —

MR. CARNEY: — as he said, across the land. Yes, every corner.

Laughter aside, this is the time in every presidency where electoral politics and governing politics become somewhat intertwined, and in the case of the American Jobs Act, the distinction is almost moot. This White House has been fairly clear that they are leveraging Republicans’ electoral prospects in order to get them to stop saying no to everything, even their own ideas. Additionally, the short and medium-term health of the economy is as important to governing as it is to President Obama’s reelection prospects.

The criticism that the President is engaging in a lot more jawbonin’ because his job is on the line has some superficial merit, but as recent events have shown, he’s had little leverage to make GOP lawmakers budge. Whatever electoral pressure the President feels is just as compelling to the GOP. If the President truly believes that his plan will improve the economy, and help turn around unemployment, then taking his case to the voters is a wise governing strategy. Those swing states swing both ways. That’s why they call them “swing states.”