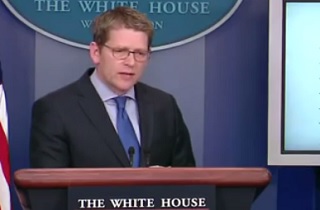 On the 10th anniversary of the Iraq War, several White House reporters tried to get Press Secretary Jay Carney to express some sort of validation of the decision to invade a country that did not attack us, and had no weapons of mass destruction. Fox News reporter James Rosen achieved a small measure of “success,” pressing Carney to credit George W. Bush for ridding the world of late Iraqi dictator Saddam Hussein. While reiterating then-candidate and then-Sen. Barack Obama‘s consistent opposition to the war, Carney said he was “happy” to dispense exactly one iota of credit to former President Bush.

President Obama issued a statement on the anniversary that focused on the bravery of our military, and the prospects of the Iraqi people, but not the more divisive aspects of the conflict, such as the decision to go to war in the first place. At Tuesday’s White House daily briefing, however, several reporters tried to extract rosy assessments of the war, and by extension, the reasons for starting it. Asked if, ten years later, Iraq is better off, Carney reiterated the President’s opposition to the war, but allowed that “ridding the world of Saddam Hussein was a welcome development.”

That allowance would become the crowbar with which Fox News’ James Rosen would pry loose some Six Degrees Of Kevin Bacon credit for George W. Bush. The exchange reads like one of those schoolyard games, like asking “George is your friend, right? And he’s a boy, right? George is your boyfriend!”

Here’s the transcript of that portion of the briefing (video to follow):

Fox News’ James Rosen: Just to follow up on the discussion of the Iraq war, none of us wants to plunge ourselves into counterfactual histories about what if. And so all we have is the record of what did occur. And when you stand here and tell us that Iraq today now has the option for a chance for a much better future than her past, that is, as a matter of factual history, only possible because President Bush decided to launch this war and send all these heroic servicemen and women into this mission. And so if credit is due to those servicemen and women, it seems to me a matter of logic that some credit would also be due to President Bush and his advisors. And that on this occasion, do you not see it that way?

MR. CARNEY: James, I would simply take up your first proposition that engaging in counterfactuals about what might have happened had we not gone to war in search of weapons of mass destruction that didn’t exist, what would have happened.

There is no question, as I made clear in several answers, that the President believes that Iraq has the potential for a better future today because of the remarkable sacrifice and service of American men and women in uniform as well as civilian American men and women who served in Iraq. And that is without question and without doubt.

It is impossible to know, obviously, what course would have occurred in Iraq had the inspections regime continued, had different choices been made. That was not obviously the world that the President inherited when he took office in January of 2009. The world he inherited was one that included America at war in two places, in two countries, with, I believe, an excess of 130,000 troops in combination — Iraq and Afghanistan.

So it really is — all these questions are very interesting, and I think the anniversary is an appropriate time to begin asking them. But I think historians will make the assessments about the policy judgments made by the administration that was in power at the time. The President had very clearly stated views as a candidate for Senate and very clearly stated views as a candidate for President that were judged and evaluated by the American people. He had very clear policy positions that he promised to implement if he were elected, and he has done so.

Fox News’ James Rosen: But it sounds to me listening to you that for what you call the “welcome development” of Saddam Hussein being gone, you are unwilling to accord President George W. Bush even a single iota of credit for that development.

MR. CARNEY: Well, I’m happy to do that, James. I think the focus on doing that is unique here in this briefing. But there is no question that Saddam Hussein was removed from power thanks to the military efforts of U.S. armed forces, and they were sent to Iraq by President Bush. So, obviously, there is a causal relationship. And to the extent that credit is due, credit is due to him for that. That does not change, I think, assessments made by this President as a candidate or by many others on this day, 10 years after, about the judgments made to go to war in Iraq and to invade the country.

And Americans obviously will continue to have different views on this, appropriately so. And this will be a matter of discussion and debate for a long time, I expect, in Washington as well as in classrooms and among historians.

But the President’s views as a candidate and as President are very clear. His commitments, when it comes to policy, have been very clear and they have been followed through on. And he believes that when he promised the American people to end the war in Iraq, he owed them to fulfill that promise, and he has.

Here’s the short answer for next time, Jay: No. When you sh*t the bed, you don’t get credit for doing the laundry. This is exactly the kind of idiocy that led Chuck Hagel to get beaten about the head by John McCain about the Iraq surge. As President Obama said, our soldiers carried out their mission bravely and heroically, but they never should have been put in that position in the first place. Is the world a better place without Saddam Hussein? That’s a tough question to answer, since there just might have been another way to get rid of him. We’ll never know. But the world is definitely not a better place without the thousands who gave their lives. Does James Rosen want to give George W. Bush credit for them, too?

Here’s the video of the exchange: