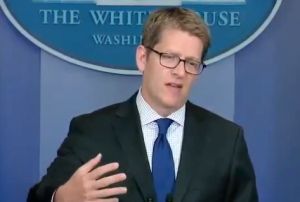 There’s been a lot of negative press around the decision to delay the employer mandate provision of the Affordable Care Act (a.k.a. Obamacare), and White House Press Secretary Jay Carney is having none of it. During today’s press briefing, Carney fired back at critics of the delay by calling them “willfully ignorant.”

ABC’s Jonathan Karl asked Carney “under what authority” did the White House use in order to delay this provision a year after it was supposed to be implemented. Carney explained that this is “not an unusual process” for presidents to take. He claimed that this is just a “political and partisan effort” to undermine the law, but Karl shot back by bringing up criticism from Democratic senator Tom Harkin.

Carney insisted that critics of the delay are just putting on their collective outrage for show, since they never really wanted the law to be implemented in the first place. He added that there’s room for flexibility in the implementation of the health care law, and after Karl posed a hypothetical Republican concern that the White House could easily delay border security provisions in the immigration reform bill, Carney lashed out at the Republican critics of the delay.

“People who suggest that there’s anything unusual about the delaying of the deadline and the implementation of a complex, comprehensive law are deliberately sticking their heads in the sand, or are just willfully ignorant about past precedent. It’s just not–it’s not serious.”