Well, tis’ the season, evidently, to heap vast amounts of shameful detail on sleazy politicians who, so far as we knew, were long ago buried alive in vast amounts of shameful detail.  Not a week after Andrew Young, the malleable former aide to John Edwards, released The Politician, his account of the sordid exertions Edwards involved him in in the course of concealing his affair with a campaign videographer, Rielle Hunter, the New York Daily News has reported that Staying True, a memoir by Jenny Sanford, the soon-to-be ex-wife of the disgraced satyr-governor of South Carolina, Mark Sanford, will come out this Friday.

Given the circumstances, the memoir’s title achieves just the right ratio of mantra to retort.  Back in 2004, Sanford scandalized local Democrats by parading swine in front of the state legislature to make a point about pork barrel spending. A savvy career move, it turns out, if a rather unsanitary one.  Four years later, people were still talking about it, and Sanford, all of a sudden, was a plausible candidate for the 2012 Republican presidential nomination.

That lasted about a month.  In 2009, Sanford, apparently in a more bipartisan frame of mind, scandalized everybody by parading his swinish exploits with a South American divorcee in front of the nation.  (Or at least, that was what eventually happened.  These things are never easy.  After disappearing untraceably for several days — he was in Argentina, we later learned, with his paramour — Sanford first tried to fob off a story about a ramble down the Appalachian trail on his wife and the public, a lie so amateurish in concept and execution it was almost charming.  Almost.) 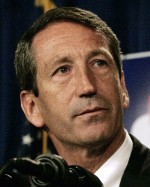 In aftermath of all this, Jenny Sanford had options, alternatives.  Two, to be precise.  She could stand by her husband, privately distraught, publically well-groomed and underslept-looking.  That was option A, tried and tested by such overachievers in the field of spousal forgiveness as Hillary Clinton and Silda Wall Spitzer.  Then there was option B, which goes a little like this: separate with dignity from your husband; damn him with decorously understated criticism; titillate/pollinate the blogosphere with rumors of your maybe running for office; and publish a memoir.  After about eight seconds of agonized deliberation, Mrs. Sanford, one infers, went with plan B.

And, unlike others who have attempted the neat trick of parlaying a two-timing husband into celebrity status (see Elizabeth Edwards), it seems to be going rather well.  People like Mrs. Sanford, sympathize with her predicament, whistle with awe at her backbone.  There have been no cries, so far, of hypocrisy or scandal-profiteering.  Then again, perhaps we’d better wait to read the book . . .