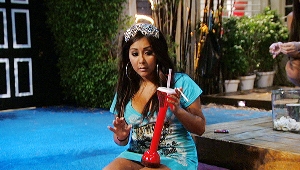 When Snooki learns Angelina had been “talking shit about Emilio” when she was in Long Island, it’s time for confrontation. Angelina denies. But Jwoww has more ammunition – apparently Angelina had talked shit to her best friends too. But which best friends, inquired Angelina? “Jay 420, Joey Yanks, Bill,” said Jwoww. More about Jay 420 from his Twitter profile: “I promote some of the hottest clubs in NY…Also as you can tell I LOVE my 420 HERB!!”

When the boys learn Jwoww knows about Ronnie’s Snooki Night, The Situation turns into The Instigation (seriously, that’s what Pauly D calls him). Pauly D says the guidos are “working on a Grenade Free America” – a noble goal – but the girl who Ronnie was hooking up with “played Tight End on the Giants.” Sammi still doesn’t know anything is going on. “I love Ron,” she says, with no knowledge of Ronnie’s hook-up with Kevin Boss. “Part of me loves you so much,” Ronnie tells her. “Like, so much it’s like sickening.” But the love between Ronnie and Sammi is real, and not just manufactured for TV. “It’s not Saved by the Bell, we’re not fucking Zach and Kelly,” he says. Not a lot of grenades at The Max…

Everyone goes back out that night, and Angelina “just needed to just forget about all the stress” – so she falls down several couches. In an exciting moment, The Situation gets bit by a girl who later rolls off him exposing – well, we’ll call her The Pixelation. Pauly D is making out with a random girl who is apparently engaged, and Angelina, drunk and forgetting stress, feels the need to inform him of this. As Sitch says, “Mrs. Cock Block comes out.”

And it didn’t end there either – back at the house, she says she would marry Pauly D: “I would marry you every day. Needless to say, this doesn’t sit well with Pauly D. Marriage?! Pauly D is only…oh, he’s 30-years-old now? Anyway, Angelina slaps him, and Sitch and Pauly D say she’s now on her own, since everyone else already hates her. Also, Vinny took the episode off apparently.