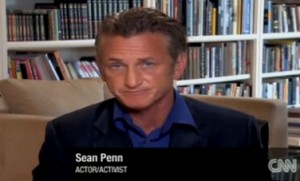 Having spent months providing relief to victims of the earthquake ravaged country, actor/activist Sean Penn seems very suspicious of singer/song-writer Wyclef Jean recently announced plans to run for President of his native country Haiti. Penn told CNN’s Wolf Blitzer “I haven’t seen or heard anything of him in these last six months that I’ve been in Haiti,” and “I’m very suspicious” because Jean had been a “non-presence” while Penn was in Haiti. The only thing weirder than Sean Penn thinking that he knows more about the current plight of Haiti than Wyclef Jean is that he may very well be right!

AOL’s “Pop Eater” sums up the interview (and Jean’s response to Penn) thusly:

Jean, 37, was born in Haiti but left soon after and was raised in Brooklyn and New Jersey. He established the Yelé Haiti foundation in 2004, providing aid and opportunities to the country’s citizens.

Penn, who has been very active on the ground in Haiti since the earthquake, highlighted allegations that Wyclef mishandled $400,000 donated for the country through his Yele Haiti foundation. “He claims he didn’t do it. That has to be looked into it,” Penn said. “I’ve been there. I know what $400,000 could do for these people’s lives.”

Wyclef’s political motives were of particular concern to Penn. “I see in Wyclef Jean somebody who could well have been influenced by the promise of support of companies. I think Haiti is clearly vulnerable … There is a history of American interests coming in and underpaying people. This is a culture of one to two dollars a day, that they were making.”

Penn openly worried about American corporations and individuals “enamored” with Wyclef becoming “opportunists on the back of the Haitian people.”

Jean responded to Penn’s comments in an interview with the Associated Press: “I just want Sean Penn to fully understand I am a Haitian, born in Haiti and I’ve been coming to my country ever since (I was) a child. He might just want to pick up the phone and meet, so he fully understands the man.”