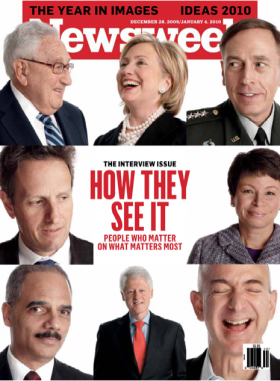 Newsweek‘s “Interview Issue” has the sort of cover that you — or nerds like me — want to pick up. Editor Jon Meacham‘s editor’s letter tried to explain why:

In the White House, John F. Kennedy offered Ben Bradlee one of the finer definitions of our craft. “What makes journalism so fascinating and biography so interesting,” JFK remarked, is “the struggle to answer that single question: ‘What’s he like?’ ” I have never come across a clearer mission statement, and the spirit of Kennedy’s point informs this special edition of the magazine, our first Interview Issue. Rather than interposing ourselves between you and a collection of thinkers and doers, we thought it wisest to convene the most interesting people we could to talk about the future and let you get a sense of what they are like for yourself.

That quote from JFK really struck me — because it really, really highlights the difference between then and now, and because now the “what are they like?” question is so regularly answered: 24-hour paparazzi, breathlessly dishing C-list friends, and, of course, Twitter. Twitter is all about answering that question, not only for celebrities and politicians, but for everyone. People what to know what other people are like, people want to know other people — and Twitter feeds that, with every 140-character snip part of a giant mosaic of information that (depending on the user, of course) is personal and, authentic, and illuminating. In theory.

The people inside this Newsweek are mostly not on Twitter, nor surrounded by nude ladies (Joe Scarborough is the exception here on both counts — his Twitter feed is filled with all sorts of fun tidbits about his opinions, life, and weekend sports-watching habits — and also features a lovely and inspiring image of a bare-breasted woman). But that aside, the “what are they like?” 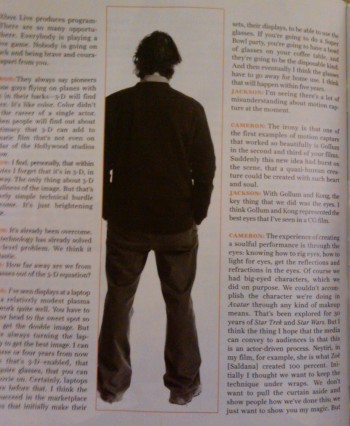 question is well-served by the mano-a-mano interview style, especially when Newsweek borrows from Interview and has its subjects interviewing each other (James Cameron interviewed by Peter Jackson will no doubt make the fanboys go wild).

Speaking of Peter Jackson — I double-taked as I turned the page of my magazine and saw his newly slimmed-down self. Nope it’s not CGI, he’s lost a lot of weight and looks sort of like Steven Spielberg (and, if I may say, rather Comic-Con sexy). And just in case you wonder if he’s carrying it down in the caboose, Newsweek obliges and shows you a picture of his ass. There you go! (Though I think it would have been sort of funny to picture Jackson next to Cameron as his 10-foot-tall Avatar.)

That double-take aside, it’s a good interview (with some decent slow-holiday-week pickup) and actors will be relieved to learn that neither of these CGI-tech wizards think they are replaceable (what is Gollum without Andy Serkis, what is Neytiri without Zoe Saldana?) (Wow, weird catch: I just noticed that in the online version it’s spelled “Naytiri” and in the magazine it’s spelled as I’ve seen it elsewhere, Neytiri.)

There’s more in the magazine, of course — I haven’t even gotten to the lead interview with Hillary Clinton and Henry Kissinger, which imparts some truly excellent advice for Secretaries of State or anyone for that matter: “One of the problems of government is to separate the urgent from the important and make sure you’re dealing with the important and don’t let the urgent drive out the important.” (That was Kissinger.) Also Hillary points out that she’s in “a constant conversation” with President Obama, lest anyone still think she’s a White House wallflower. Interestingly, Newsweek picks Tim Geithner as their VIP on the economy (not that also-ran Person of the Year Ben Bernanke), and interviews with (in no particular order) Hamid Karzai, Eric Holder, Valerie Jarrett, Jeff Bezos, Nancy Pelosi, David Cameron, David Petraeus, Nancy Pelosi and a few others. (NB: Newsweek‘s online strides aside, I had to search real hard to find the path to all these interviews on the homepage.) 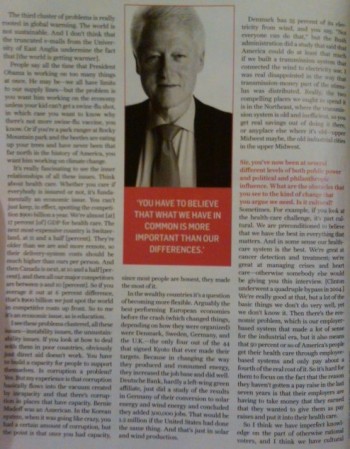 And finally, I must mention the Big Dog: Bill Clinton, who is the Mr. Brady to Hilary’s Carol on the cover (oh how fun if they’d shot him looking up!). It is worth noting that layout wise the interview questions are highlighted in different colors, which cut through the text every few paragraphs — everywhere, that is, except for with Clinton, whose answers are typically long, thoughtful, many-paragraph’d opuses that stretch for many a column inch. That said, he’s Bill Clinton, so not only would you expect nothing less, you really wouldn’t want it, either; the guy has some pretty good stuff to share. Here’s some — what qualifies for a soundbite with Clinton — but also, again, a pretty good rule of thumb to guide all of us in the year ahead:

My simple premise is that the mission of the 21st century is to build up the positive and reduce the negative forces of interdependence. If you ask me my position on anything, I may give you the wrong answer, I may make a mistake, but I think I have the right filter. I’ll ask myself on any profound issue: will this increase positive interdependence or reduce negative interdependence? If it will, I’m for it. If it won’t, I’m against it. I really believe creating a shared intellectual framework—not just for policymakers and business leaders and labor leaders and education leaders, but for real people who intuitively know this is true—is a precondition for not only the United States, but others making good decisions going forward.

(Note: A paragraph referring to JFK and yesterday’s TMZ photo purporting to show him lounging on a boat with naked women was deleted when it was revealed that the photo was a hoax.)