Joe The Plumber Slams Sen. John McCain: “He Screwed Up My Life” 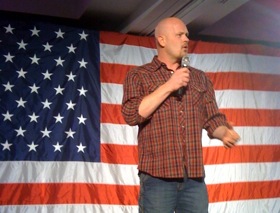 Poor John McCain – not even his imaginary friend Joe the Plumber likes him anymore. Joe, who you’ll remember is neither named Joe (real name Samuel Wurzelbacher) nor is a plumber, may have thought he could slip some harsh words against the 2008 Republican presidential ticket by the mainstream media, commenting to Pennsylvania Public Radio’s Scott Detrow, but the fifteen minutes of fame the McCain campaign gave him seem to be lasting longer than the excitement over a Levi Johnston Playgirl shoot.

Wurzelbacher is making waves in – where else? – the Tea Party circuit this year by endorsing candidates in the upcoming midterm elections. The Ohio native was visiting Pennsylvania to speak at a “Mobilize for Liberty” event organized by Republican gubernatorial candidate Sam Rohrer, one of five endorsements Wurzelbacher has given out of more than 200 solicitations. The article makes no mention of whether Wurzelbacher is being financially compensated for his endorsements, though if the five endorsements per 200+ requests ratio is true, it would speak to the contrary. While the fact that he is being solicited for endorsements and is apparently quite picky about them is a shock in and of itself, his words for the people that gave him the leverage to endorse at all come as an even greater surprise from this reluctant hero:

Wurzelbacher said, “McCain was trying to use me. I happened to be the face of middle Americans. It was a ploy.”

So why’s he still milking the Joe the Plumber image, appearing at conservative events across the country? Wurzelbacher says it’s his duty to take advantage of the platform he’s been given. He wants to talk up the issues he cares about, and encourage the grassroots tea party movement.

Doing his “duty” instead of refusing to fade into obscurity like he claims to want to: it’s the George Washington card, the one he most likely learned to play from his benefactor Sarah Palin. But he’s turned against her, too! According to Detrow, “he said he doesn’t support Sarah Palin anymore. Why? Because she’s backing John McCain’s re-election effort. ‘John McCain is no public servant,’ he told the room, calling the 2008 Republican nominee a career politician.” Contrast this to his opinion of Barack Obama, who he defended from birther criticism (birthers, he said, “belittle and set back” the tea partiers), and almost complimented him at least for his honesty: “I think his ideology is un-American, but he’s one of the more honest politicians. At least he told us what he wanted to do.” For what it’s worth, “one of the more honest politicians” is certainly not something Wurzelbacher appeared to be comfortable saying about McCain or Palin.

The “face of Middle Americans” has gotten pretty dour since we last saw it, but welcome back to the spotlight anyway, Joe/Sam! Below, another example of Wurzelbacher “doing his duty” by joining Arkansas Senate candidate Col. Conrad Reynolds on a state tour: