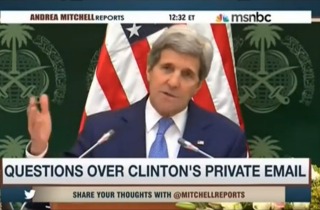 Speaking at a press conference in Saudi Arabia on Thursday, Secretary of State John Kerry seemed to all but mock the press for focusing on Hillary Clinton‘s emails during her time at State. That issue was the subject of a bombshell New York Times report that questioned the legality of Clinton’s exclusive use of a personal email address while she was the nation’s top diplomat.

“The State Department has had access to a wide array of Secretary Clinton’s records, including emails between her and department officials with the State.gov accounts, as well as cables, as they do for every Secretary of State,” Kerry said.

He then added (with some snark at the end): “I think we have all the ones that are State.gov, which are appropriately the ones in the purview of the department, but let me check on that when I actually have time to pay attention to such an important issue when I get home.”

A senior State Department official told Reuters on Thursday that a full review of Clinton’s emails “is likely to take several months given the sheer volume of the document set.” Clinton addressed the controversy for the first time with a tweet on Wednesday night in which she pledged to release all of her emails. At this point, though, it remains unclear whether Clinton’s email situation was actually illegal.