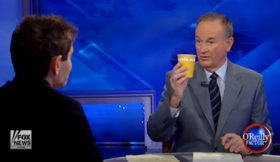 John Stossel is possibly the most eccentric figure on Fox News, which, in a constellation that includes Glenn Beck and Griff Jenkins (obscure but completely bizarre), is not an easy feat. But he hasn’t accomplished it based on personality traits– his dedication to finding highly useful information on under-the-radar public interest stories is unparalleled in the industry.

As noted before, his take on the problems facing the nation has becoming essential to the national political discourse not just because of his opinions, but because he covers problems that many other commentators are too busy following issue trends to find. On his weekly visit to The O’Reilly Factor last night, he chose to tackle every living person’s most important concern: water consumption.

Stossel took time out of fighting big government policies in Cleveland– a new cause he has taken up with Drew Carey over at his Fox Business show– to discuss the recent release of the documentary Tapped, an in-depth look at the bottled water industry that argues there is little difference between tap and bottled water and the packaging of the latter creates major health complications for consumers. Stossel gave Bill O’Reilly his take on both the statistics in the movie and the bottled water industry itself. Turns out Stossel is a fan of tap water, but that doesn’t mean he’s going to buy into “nonsense” claims by “silly lefties who attack industry” that bottled water can cause a number of grave diseases, like cancer and liver disease. He also doesn’t believe the statistic that 40% of bottled water actually comes from the tap.

What he does believe is that bottled water is neither better tasting nor better for you than tap water. “We’ve done all kinds of taste tests; tap water almost always wins,” he said, though admitting his wife makes him buy bottled water against his preference. He also made the point that the price of bottled water is, compared to other commodities like gasoline, extremely high– in fact, bottled water costs more per ounce at a gas station than the gas itself.

As for O’Reilly’s personal bottled water consumption habits, Stossel had this analysis: “You are being scammed, but you can afford it!”

Check out the clip from last night’s Factor below: