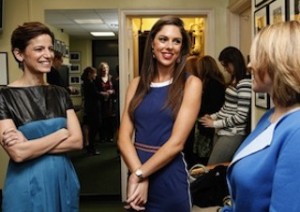 Former Republican presidential candidate Jon Huntsman Jr.‘s daughter Abby Huntsman has inked a deal with Huffington Post to host a show on HuffPost Live, a web TV network the site will roll out.

Huntsman began blogging about politics for Huffington Post in February, after her father dropped out of the race. She has appeared on CNN as a political contributor, and previously worked as a booker for for ABC News in Washington, D.C., and Good Morning America in New York City.

Huntsman told Mediaite she sees the HuffPost Live as the future of broadcast media.

“I couldn’t be more excited about this next chapter in my life,” she said. “HuffPost Live, launching later this summer, will be a live streaming channel focusing on real conversations with real people. I truly believe this will be the future of broadcast media and am thrilled to be working with such a talented group of people.”