Jon Stewart Blasts Viacom For Removing Online Content: ‘What Are You, China?’ 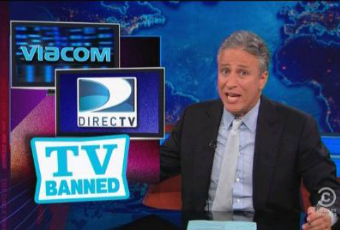 Comedy Central’s The Daily Show returned to the air last night after a two-week hiatus, and Jon Stewart was admittedly happy to be back with all his viewers. Except, of course, his viewers who happen to be DirecTV subscribers. With the DirecTV-Viacom contract dispute still unresolved, Stewart took to blasting Viacom for going as far as removing its free content from the Internet, asking the company, “What are you, China?”

“If you’re a DirecTV customer not watching tonight, it’s not because a rain cloud passed in front of the satellite,” Stewart joked, and then went on to mock the viciousness of the contract dispute: “Viacom, DirecTV, what are you doing here? You got ad campaigns blaming each other for taking the shows away, telling people to rise up and demand it like it’s some kind of basic cable Arab Spring. I got news for you: It’s not. None of this matters.

“Do you remember Oprah? Exactly. She went off the air for three days, millions of viewers were like, ‘Oh, no! What are we going do?’ After day four people are like ‘Who is this Ellen?'”

Stewart then went after Viacom for pulling full episodes of its programming from the web.

You’re pulling the shows from the Internet? Viacom, what are you, China? And, by the way, you don’t think the kids don’t already have a work-around? This morning when I woke up, my 8-year-old son was watching The Dark Knight Rises in 3-D. They’re already figuring it out. So basically you’re blocking the old people from watching the show.