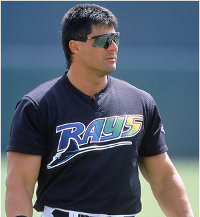 By design, it is almost frighteningly easy to disseminate information quickly on Twitter. This can be a good thing, but also leaves us vulnerable to exposing the world to moments that aren’t exactly our finest. Washington Redskins running back Larry Johnson is among the most high-profile victims of Twitter blowups, as his led to his release from the Kansas City Chiefs last year. And the Twitter-centric controversies surrounding embattled MSNBC anchor David Shuster are well-documented here.

Today, Twitter claimed its latest victim – ex-baseball star/memoirist/struggling mixed martial artist Jose Canseco. That Canseco finds himself at the center of another controversy is no surprise, but the vitriol contained in some of his tweets might be. Let’s get to them.

The one that started it all:

It appears he flew into this rage pretty much out of nowhere, and it wasn’t long before he was endorsing eugenics:

We are geneticly an evil species that needs to be corrected

(Note: yes, Canseco’s tweets contain a lot of poor spelling. In an attempt to avoid piling on, we will acknowledge that fact and let that be that.)

His anger really reaches a fever pitch with this duo:

We also see Canseco’s persecution complex here – he’s always maintained he was blackballed from major league baseball, and suggests as much again here. But here’s the thing – Canseco had to know his book – even if his many steroid-use-related accusations were correct (and surely some were) – was only going to make his situation in the game worse. No one likes being involved in a tell-all: just ask ex-pitcher Jim Bouton, whose now-legendary 1971 book Ball Four made him a black sheep for little more than revealing that baseball players were imperfect human beings.

Individual trash-talkers were not spared Canseco’s wrath, either:

Later on, it starts getting stranger:

And after his barrage ended, he said he’d been venting and “it feels good just to let it out,” then accused his followers of having “no sense of humor.” Even if he didn’t mean to, this implies all his earlier tweets had been part of a giant joke, and it sure doesn’t seem that way, but then again, as Canseco himself tweeted:

If nothing else, Canseco is entertaining, a fact he acknowledged himself at one point during his outburst: “Accept the truth,” he tweeted, “I make ur life more exciting.” He does indeed. Interestingly, he also claimed Bill Maher as a personal hero in the middle of his tweet storm, another public figure with a penchant for speaking up, possibly to a fault. At the end of it all, Canseco had this to say to his critics:

Give him this, too: the man will take a stand. And if all this seems overly harsh on the guy for losing his temper, like it’s exploiting someone’s lowest point, just know this: as this tweet from seconds after Butler’s heartbreaking NCAA basketball championship game loss to Duke will attest, the author of this post is far from immune to less-than-ideal gut reactions. It happens to us all.