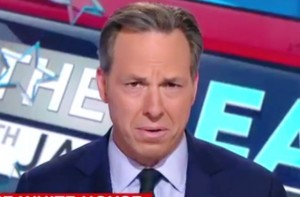 CNN’s Jake Tapper was unequivocal in his condemnation of the leak that delivered Hillary Clinton a question from a CNN town hall.

Tapper called the revelation “very, very troubling” in an interview with WMAL Thursday. He continued:

Brazille left CNN when she took over as interim chair of the DNC in July.

CNN has insisted that it did not lose custody of the question; reports have suggested that the leak came from Brazile through TVOne, whose Roland Martin co-hosted the debate in cooperation with CNN.

People at CNN take this very, very seriously and to have somebody who does not take it seriously and to have us partner with that person and then they do something completely unethical and share it with Donna Brazile who then shares it with the Clinton campaign… it’s horrifying and very, very upsetting and I can’t condemn it any more than… I condemn it in no uncertain terms, it’s awful.