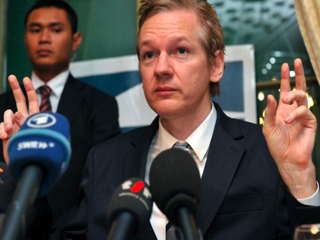 Most people following the case against Wikileaks editor-in-chief Julian Assange would probably argue that he and his legal team are in no position to be thinking about prosecuting anyone else, but that hasn’t precluded Assange’s attorney from threatening to do just that. In an interview with NPR, attorney Robert Stary threatened legal action against, of all people, Sarah Palin for “incit[ing] others to commit violence” against Assange, a crime, he says, that could result in “private prosecution.”

In a report on Assange’s supporters in Australia, NPR catches up with Stary, who, while based in Melbourne, has his hands full with the case against Assange in Europe. He tells NPR that “our main concern is really the possible extradition to the U.S.,” and that he was particularly incensed by language coming out of many on the American right equating Assange to Al-Qaeda or other terrorist groups. He notes specifically the comments coming from Sarah Palin– who is busy enough deflecting accusations of inciting violence in America– calling for military action against his client. This was a crime, as Australian freedom of speech laws are somewhat more restrictive and do now allow for direct inciting of violence, according to Stary:

Anyone who incites others to commit violence against his client, even outside Australia, Stary says, is violating Australian law, and can be held accountable for it.

“Certainly if Sarah Palin or any of those other politicians come to Australia, for whatever purpose, then we can initiate a private prosecution, and that’s what we intend to do,” Stary said.

Let’s face it: the odds of Sarah Palin having any reason to visit Australia– and the odds of Stary not being in the UK or Sweden to help Assange avoid jailtime– are slim to none. But the way that the American concept of free speech seems to be completely lost in translation on Stary and Assange– who really should be worrying about more important things than Sarah Palin– is fascinating to watch. And should Stary follow through on his threat, laughable as it may sound, it certainly can’t do much good to Palin’s potential 2012 campaign.