Just So You Know, Jill Stein Spends More on TV Ads Than Trump Does

Just So You Know, Jill Stein Spends More on TV Ads Than Trump Does 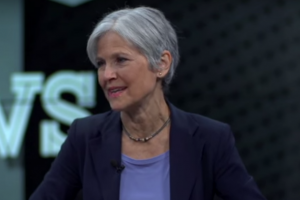 When was the last time you saw an ad for Donald Trump on television? What about Jill Stein? They’re both running for President, you know. Here at Mediaite, we watch a lot of TV. There are monitors all over the office. A quick poll revealed that none of us have seen a Stein commercial. Another quick poll revealed none of us have seen a Trump commercial, though LawNewz‘s Ronn Blitzer did observe that “all of TV is a Donald Trump commercial.”

Anyway, Stein, the nominee of the Green party, is spending more than Republican nominee Trump on those commercials that don’t exist. (That’s especially silly when you remember how Trump was being overcharged for commercials in some states in March.)

She’s spent $189,000 more than Trump…because he’s spent $0 on television commercials, says the Washington Post. They went on to say that Trump’s decision not to place television ads is perplexing:

[W]aiting only makes the problem worse. The longer the Trump campaign waits to reserve ad time, the less ad time exists to buy and the more ads cost. During a presidential general-election year, candidates are competing with each other for ad space, but also with people running for the Senate, the House and local office. If you want to buy ads on local news in Pennsylvania, for example, you’re competing with a lot of other campaigns for those 30 seconds. To the glee of station owners, that helps drive up prices.

What do you think Trump is waiting for here?

(WaPo says that’s a “question that defies a logical answer,” so there’s that.)