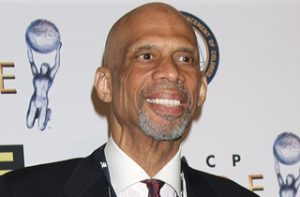 Six-time NBA MVP Kareem Abdul Jabbar is slamming ABC’s The Bachelor in a column he wrote today for The Hollywood Reporter. Amazingly, the show returns for its 21st season tonight (there have also been 12 seasons of The Bachelorette). While Jabbar acknowledges that the show is undoubtedly “compelling fun,” he argues that “there is an insidious darkness beneath the fairytale pabulum they are serving up.”

He also says that while there is nothing wrong with the show’s short-term effects of “watching people scramble for ‘love’ like ravenous crabs on a washed up seal corpse,” the long-term effects can have serious consequences.”

Jabbar goes on to talk about the effects of the show on women, and the pressure to fit “a very narrow ideal of Ken and Barbie doll physical beauty. These shows promote the scorched-earth effects of raising females to be continually judged physically above all other attributes and then measured against impossible physical standards that has marginalized a majority of girls and women — and made billions for the beauty products, clothing, and cosmetic surgery industries.”

He also comments on the show’s lack of physical diversity, and the fact that intellect isn’t valued. He concludes with a warning. “The real danger is when we try to apply that fantasy thinking to our own lives,” he says. “And when we think about where our children learn about the realities of romance, it becomes even more important to question what may influence their behavior in choosing a partner.”

For the full column, head over to The Hollywood Reporter.