Kathleen Sebelius Admits: ‘I Sure Made Some Mistakes’ on Obamacare 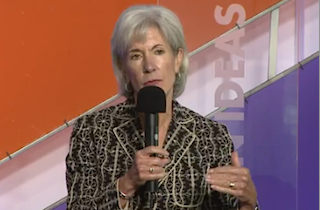 On Friday, former Health and Human Services Secretary Kathleen Sebelius traveled to Aspen, Colorado where she sat down for an hour-long conversation about her career — with a major focus on the Affordable Care Act — with Aspen Institute CEO Walter Isaacson as part of the Aspen Ideas Festival.

During her answer to an audience member’s question about leadership, Sebelius admitted that she “made some mistakes” during the rocky Obamacare rollout by focusing too much on the insurance marketplace and not enough on the technology Americans would need to use to purchase that insurance.

“I sure made some mistakes along the way, in terms of focusing on some things and not on others,” Sebelius said. “I was terrified, as we looked at the roll-out of the health plan, that we wouldn’t have a market. That was my biggest focus and fear. And I spent a lot of time and energy with insurers, with consumers, with my old colleagues at the insurance commissioners’ offices, trying to make sure we actually had companies who came in to the market.”

At the same time, she said she spent “too little time, clearly, on the technology side, on making sure that what I was hearing was actually accurate and getting enough eyes and ears on that.”

In terms of President Barack Obama’s “leadership,” Sebelius said that as a governor she was used to working for the voters so it took some adjusting to realize she needed the president’s approval on decisions as one of his cabinet secretaries. “I hadn’t had a boss in a long time,” she said.

Watch video below, via The Aspen Institute: