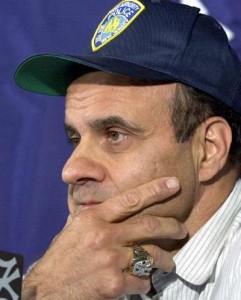 In a possible preview of tonight’s “Worst Persons” segment, Countdown host Keith Olbermann took to his Baseball Nerd blog to blast Major League Baseball over its decision not to allow the New York Mets to wear caps honoring NYPD, FDNY, and other first responders on the tenth anniversary of the 9/11 attacks. This is probably a rare instance in which even the polarizing pundit’s fiercest detractors will have difficulty disagreeing with him, although I’m not sure New York icon Joe Torre deserves a total pass for delivering the bad news.

Joe Torre, MLB’s executive vice president for baseball operations, told The Associated Press in a phone interview the decision was made to keep policy consistent throughout baseball.

“Certainly it’s not a lack of respect,” Torre said. “We just felt all the major leagues are honoring the same way with the American flag on the uniform and the cap. This is a unanimity thing.”

Olbermann does an excellent job of filling in the historical context of MLB’s decision, and of expressing the outrage that many, if not all, people will feel over the decision, but he’s not buying Torre’s “unanimity thing.” The real reason for this knuckleheaded move, he says, is the almighty dollar:

If you still haven’t figured out why MLB is permitting this public relations disaster to happen; why Commissioner Bud Selig didn’t get on the phone and tell the Mets they could wear those caps right away and damn the consequences, the answer is to be found here.

In case you don’t want to follow the link, here’s your answer: this is available as of tonight directly from MLB for just $36.99. 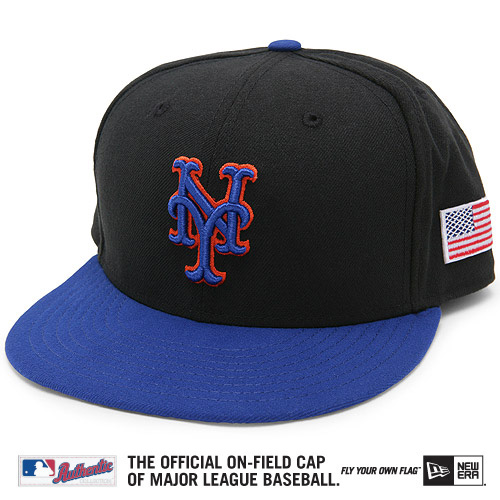 Whatever the real reason, it’s a lousy decision, and as a lifelong Yankee fan, I’m not as inclined as Olbermann is to give Joe Torre a pass here. Olbermann writes, “they blamed it on MLB Vice President Joe Torre, the native New Yorker who wore these caps at the end of the 2001 season. So if it hadn’t been shameful already, pinning it on Torre made it doubly shameful.”

The implication is that Torre would never have made such a call himself, and was forced to walk this idiotic plank by the evil MLB owners cabal. Sorry, no sale. If Torre had any qualms about this decision, he could have referred the AP to any number of MLB flacks, or better yet, he could have prevailed on his overlords not to do this. Whatever sense of betrayal this episode creates, Torre owns a piece of it.

There is a delicious irony to the fact that Olbermann writes his anti-MLB screed on his Official MLB blog, where they’re not likely to miss it, but perhaps he should take a page from one of his Twitter followers, and donate whatever MLB pays him for that to a related charity.

Olbermann makes another observation in his column that I found interesting for the way it illustrates the different ways Americans feel about 9/11. Asked, by someone on Twitter, what’s so patriotic about wearing first responder caps, Olbermann writes:

It never crossed my mind. It has nothing to do with patriotism. 343 firefighters and paramedics died that day. 23 New York policemen did. And 47 from the Port Authority Police. This is about remembering them – and acknowledging what all those who survived did for this city and the wounds they still have. For me, as the grandson of a New York fireman, and the descendant of several others, and many NYPD and regional PD, this is something deeper than patriotism.

I would quibble with the phrase “it has nothing to do with patriotism,” but between the lines, I think Olbermann identifies what is actually the cheapening of patriotism. Symbols are important, but patriotism doesn’t exist in a flag pin, or an embroidered cap, or a magnet that looks like a ribbon. It exists in the ways in which we come together; out of many, one. That anyone could miss the patriotism in the actions of those first responders, and those who seek to honor them, is evidence that some who promise to “never forget” never knew it in the first place.