Donald Trump‘s campaign manager has once again retweeted something unflattering about him.

On Wednesday, during the presidential debate, Kellyanne Conway retweeted someone who said that his off-the-cuff comment about “bad hombres” in America was the part of his remarks that hadn’t been approved by Conway. People immediately jumped on her for retweeting something that boosted her profile by dragging his down. The general feeling seemed to be that she had jumped ship, was moving away from association with Trump, and was refocusing on her post-November 9 career options. 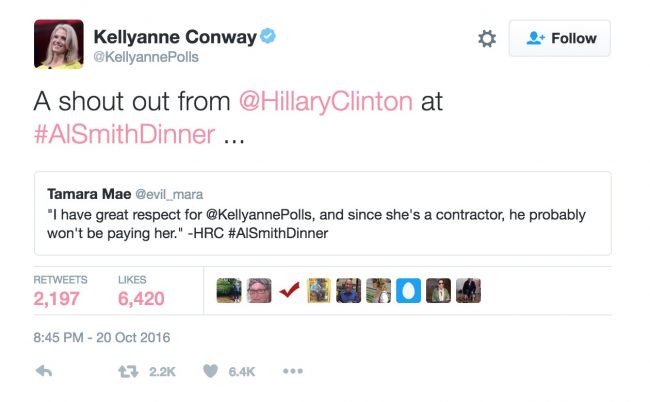 There are more questions than answers here. Is she quietly affirming he hasn’t paid her? Is she building a sympathetic public image so she can later claim he treated her badly, which led to her massive post-election change of heart and makes her hirable to someone else? Did she really not realize how bad that — or the first retweet on Wednesday — made him look?

.@HillaryClinton @KellyannePolls is just trolling @realDonaldTrump at this point.

Translation: “I’m still respected across the aisle, and Donald Trump had better pay me what he owes me.” https://t.co/i72poEd6H0

My god, woman, it’s as if copies of your resume are already spitting from the campaign office xerox machine. https://t.co/vCU5iZ86pF

Is Kellyanne subtly telling us she isn’t getting paid, looking for work, thinks HRC was way better at #AlSmithDinner or all three ? https://t.co/kRUJ5ocKwb

Oh my god, this woman is hilarious! She is lately retweeting compliments for herself at the expense of her boss. This election is nuts. https://t.co/s3NgQacumA

Sounds like everything is going really well at the office… https://t.co/YIoKmYbGc2

Her Twitter feed is becoming almost as unpredictable as Trump’s.