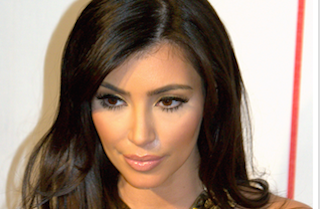 In a move that probably will not manage to steal any of the spotlight from her stepfather’s big interview with Diane Sawyer set to air later tonight, reality star Kim Kardashian has penned an op-ed for Time magazine published Friday afternoon that challenges President Barack Obama to label the massacre of Armenians that occurred 100 years ago this week a “genocide.”

Kardashian, who traveled to the country of her ancestors this past month for the first time with her sister Khloe, daughter North and husband Kanye West, wrote that she was inspired to “speak out” against the killing of more than a million and half people that has largely been forgotten, even by Armenian-Americans.

“I would like President Obama to use the word ‘genocide,'” she wrote. “It’s very disappointing he hasn’t used it as President. We thought it was going to happen this year. I feel like we’re close—but we’re definitely moving in the right direction.”

Kardashian also called on the government of Turkey to recognize the genocide, writing, “I think if they recognize it and acknowledge it, everyone can move on. I believe in moving on and looking toward a brighter future, but you can’t move on unless you acknowledge the past. To not do so is an act of disrespect.”

The Kardashian-West clan’s trip to Armenia was mostly overshadowed by Kanye’s decision to jump in Swan Lake during a free concert in the capital of Yerevan. After hundreds of fans followed him into the water, police shut down the show.

Crazy night! Kanye wakes me up & says he's doing a free concert in Yerevan, Armenia! I throw on sweats & we go! pic.twitter.com/2cjbaJbz7q