Krauthammer on 2016: Every GOP’er Can Beat ‘Paper Tiger’ Hillary Clinton 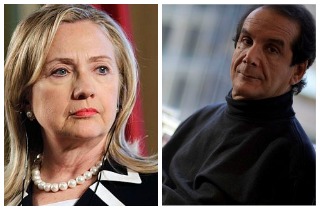 Syndicated columnist Charles Krauthammer joined conservative radio host Hugh Hewitt on Tuesday where he was asked for his preliminary take on the 2016 presidential field. Krauthammer ran though the strengths and weaknesses of the most likely GOP candidates and observed that every possible contender could beat Hillary Clinton. “Hillary’s a paper tiger,” he declared.

Hewitt imposed a lighting round format on Krauthammer during the interview and asked for one word descriptions of the current likely field of presidential candidates heading into 2016.

Of Louisiana Gov. Bobby Jindal, Krauthammer said he was “very strong” and “could be a contender.”

“A lot of energy” and “a great orator,” Krauthammer said of Sen. Ted Cruz (R-TX). He was cautious about Sen. Marco Rubio’s (R-FL) political prospects who he said had been tarred by his pro-immigration reform advocacy.

“He’s got courage,” he continued. “I think he might decide he can serve conservatism in the country best as House budget chairman, but if he runs he’d be a very strong choice.”

Turning to the Democratic field, Krauthammer said that “every single one” of the potential GOP candidates mentioned can beat Clinton in 2016.

“Hillary’s a paper tiger,” Krauthammer asserted. “I think she can win, of course, and I think she’ll get the nomination by acclamation for religious reasons – she’s worshiped by the Democrats – but I don’t think that translates necessarily.”

“The idea that she’s a shoo-in for the presidency I think is just ridiculously wrong,” he continued. “The hyperbole about her being Secretary of State – name me one thing she achieved in the four years? One?”