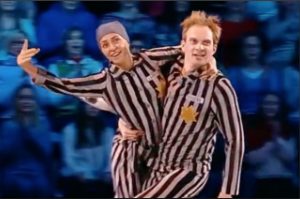 A high-ranking spokesman for the Kremlin is sticking up for his wife, after her ice-skating routine drew global outrage this weekend.

On Saturday, former Olympic skater Tatiana Navka and her dance partner, Andrei Bukovsky, participated on the Russian reality show Ice Age. Their routine was based on the Holocaust, which was evident in their battered appearance and their outfits which resembled prison uniforms that bore the Star of David.

The routine was an homage to Life Is Beautiful, an Italian film about a Jewish father who uses humor, games, and imagination to protect his son from the truth about their internment at a Nazi camp. While Navka said it was meant to be their way of paying tribute to Holocaust victims, there was a great deal of backlash from several places in the global Jewish community.

“Not one of the 6 million danced and a concentration camp is not a summer camp,” said Israeli Culture Minister Miri Regev, according to France 24. Similar thoughts can be found on Navka’s Instagram account, which has seen a deluge of negative comments recently.

According to The Hollywood Reporter, Dmitry Peskov, Navka’s husband and a presidential spokesman, praised his wife, even though he said that the Kremlin wouldn’t comment on the matter. “I’m proud of my wife. This is all I can say,” he said.

Russian Jewish Congress president Yuri Kanner reacted to the routine by saying, “I didn’t see any improper affectation in Navka’s dance. It was clear what the skaters wanted to say.”