Kurt Schlichter’s I Am A Conservative: A Time Capsule For The 21st Century American Right
Book Review

Kurt Schlichter’s I Am A Conservative: A Time Capsule For The 21st Century American Right 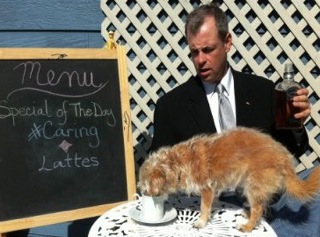 Conservatives on Twitter had much to look forward to this week when one of their most prominent online figures, Breitbart.com contributor and California attorney and media personality Kurt Schlichter‘s new ebook, I Am A Conservative, dropped this week. Schlichter, who is often at his most eloquent in tweet form, took the format straight to a book of short aphorisms in the style of an old-timey philosopher– or at least an old-timey philosopher who really hates unions, unnecessary government spending, and President Barack Obama. And as bold and to-the-choir as the book may sound, it’s a particularly great read for any left-winger who may be confused as to the what the American right’s post-Bush ethos really looks and sounds like.

The triple threat writer (Army Colonel, contributor to Breitbart.com and the New York Post, attorney) put together a book unique in at least one important aspect– it is a collection of tweets, elaborated upon with chapter introductions and keeping their original hashtags– but going further than many other works in explaining in no uncertain terms what the American right responsible for the 2010 midterm Republican surge really stand for. If you’ve read his work before or follow him on Twitter, the book threatens to verge on repetitive in some ways– the words “shame” and “welfare” and “community gruel pot” form the backbone of Schlichter’s philosophy– and this book is nothing if not a collection of philosophical aphorisms for how to live one’s daily life. And for those unfamiliar with Schlichter, especially left-leaning readers, the writing still will feel obnoxious and violent and deliberately rude. Of course, anyone who considers the books inherent snot-nosed apathy for readers’ feelings a detriment fails to see the point Schlichter makes in the first line of the book: he doesn’t care that you think he’s obnoxious, he would really rather you keep quiet and fetch him his latte, please.

The major political fare centers around three issues: limiting the social welfare state, empowering the military, and keeping the government out of people’s daily lives. There are more general words of wisdom, too, like “Bad things should happen to stupid people” and “razing the town, killing the men, selling the women and children into slavery and plowing the ground with salt was the kind of can-do, outside-the-box thinking that made the Romans people who were just plain not to be screwed with,” but most come back to keeping the government small and getting people to work. It is often mean (“Don’t want to work? Awesome! You might find yourself hungry and cold, but you’re an adult and you get to contend with the consequences of your choices”) and deliberately irrelevant, but one thing its detractors can’t attack is actually its strongest suit: the book is a fun one. “The idea is that you can flip to any page and just start reading,” Schlichter helpfully explains in the beginning, “It helps if you’ve had beers. Actually, having some beers helps most things.” These the instructions for a book that defines world peace as “the utter defeat of our jihadist and communist enemies,” it is clear that Schlichter believes what he says, but he isn’t going to put himself above the message. And as familiar as the message may be to the fans who will happily pick up a copy, there is one big surprise for liberal readers.

Much to the chagrin of everyone that calls the American conservative movement (as distinct from the Republican Party) a “family values” movement, there are no social issues in this book. The closest to any social issue that comes up, aside from the repeal of any and all welfare programs, is what Schlichter considers the racist history of the left (Sen. Robert Byrd‘s membership in the KKK is a sort of motif) and his appreciation for Justin Bieber having a job, “unlike you liberals.” Juggalos– the bizarre group of people who follow rap-rock band Insane Clown Posse– get a shout-out here or there (negatively, of course), and Schlichter boldly declares that “My taste in post-punk power pop is better than yours, you progressive, conformist poser. Look there, the The Shins!” Anyone looking for a treatise on gay marriage, abortion, racism, or “thinking of the children” will be dismayed, and Schlichter makes it rather clear that he doesn’t expect anyone that agrees with him to be on that side of the equation.

Instead, what Schlichter proposes is a concise summary of what conservatives stand for in 2012, and have stood for since about 2009. The chapter topics, in some ways, parallel the core issues that catapulted some of the newest stars of the Republican Party to power: strict adherence to the Constitution (Sen. Rand Paul), uncompromising positions against human rights abuses abroad (Sen. Marco Rubio), a clear call to curb the power of unions (Gov. Scott Walker), and general jolly belligerence (Gov. Chris Christie). If anyone need understand the motivations and ideology of American conservatives in its most distilled form 50 years from now, they will find it all here, in helpful, 140-character nuggets.

Schlichter’s book, I Am A Conservative: Uncensored, Undiluted and Absolutely Un-PC is available at Amazon now.