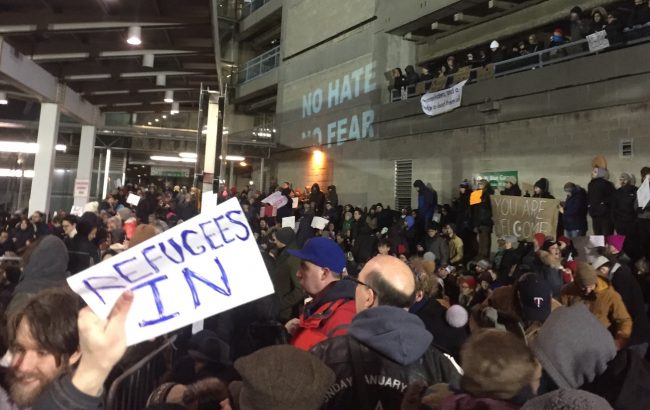 Throughout the day, protests have grown in international airports across the country in reaction to Friday’s immigration executive order signed by President Donald J. Trump. And after hours of being told that there were eleven detainees from the seven Muslim-majority countries directly affected (one was released), we are now learning through lawyers that there are scores more inside of New York City’s JFK Airport.

CNN’s Shimon Prokupecz reported shortly ago that “dozens and dozens” of detainees are being held inside the airport, as per lawyers familiar with the situation.

Lawyers representing some of the detained travelers say “dozens and dozens” of people are currently detained at JFK.

Lawyers have asked government attorneys to agree not to send back those being detained, but the government has not yet responded.

The executive order signed at 4:42 p.m. EST Friday by President Trump was the most severe action yet regarding immigration from Muslim-majority countries; citizens from seven countries in total — Iraq, Iraq, Sudan, Somalia, Syria, Libya, and Yemen — are suspended from entering the country for 90 days as part of the executive action. Additionally, all Syrian refugees are suspended indefinitely, and all refugees from other countries are now barred from entering for four months.

Earlier today, one Iraqi man was released after being detained for 19 hours at JFK; Hameed Khalid Darweesh, who previously served as an Iraqi interpreter for the U.S. military, told media outside of JFK’s Terminal 4 how thankful he was to be in the United States. He spoke about his situation, saying, “I have a special immigration visa in my pocket, me and my family, because I worked for the U.S. government. I support the U.S. government from the other side of the world. But when I come here, they said no. They treat me like I break the rule or did something wrong. That surprised me.”