Lena Dunham to Bieber: No More Songs ‘Where a Girl Nods Yes When She Means No’

Lena Dunham to Bieber: No More Songs ‘Where a Girl Nods Yes When She Means No’ 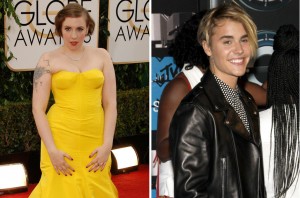 Lena Dunham took to Twitter on Monday to express her disappointment with a few of the lyrics of Justin Bieber‘s new song, “What Do You Mean?”

Dunham, who called Gawker out in July for publishing “cruel and unnecessary stories,” was apparently not a fan of Bieber’s latest track, which he debuted at the 2015 MTV Video Music Awards on Sunday night. Specifically, the Girls star took issue with the lyrics, “What do you mean?/When you nod your head yes/But you wanna say no/What do you mean?”

Let’s do away with pop songs where a girl nods yes when she means no and vice versa, k?

Neither Bieber nor anyone affiliated with the single has responded to Dunham’s tweet, though in true Twitter fashion, many others have. Most notably the trolls and the Beliebers:

Did your little sister say yes or no? @lenadunham https://t.co/s0jel8NhCZ

. @lenadunham ah, most of his fans are rabid demented demon spawns..so turn your notifications off because they will GO IN ON YOU

@lenadunham the song is about being confused with girls don’t make it into something it’s not!